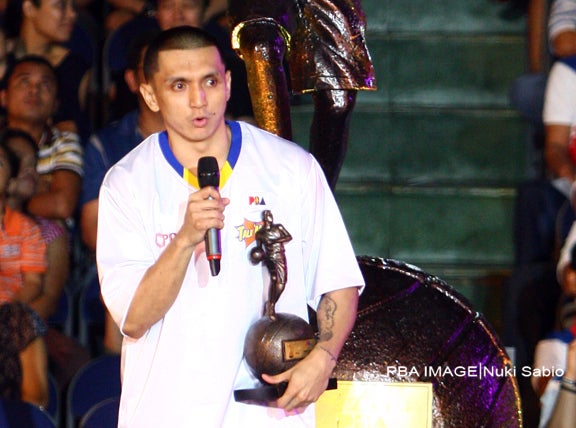 “It’s been a special year,” said the 33-year-old Alapag, who is at the heart of the Tropang Texters’ bid for a Grand Slam this year,  during the Annual Leo Awards held before Game 4 of the Governors’ Cup finals at the Smart Araneta Coliseum.

The bulk of Alapag’s points came from the media (1,030) with statistics accounting for 335, TV coverer Solar’s votes contributing 300, the players votes adding 173 and the league giving him 50.

Santos was second in the media voting for 646 points, but he was the top choice among players and the league, which netted him a combined 533 points. Statistics accounted for 408 points and Solar’s vote gave him another 100.

Jason Castro, who was also named Most Improved Player, was part of the second mythical team together with Talk ‘N Text teammate Ali Peek, B-Meg’s James Yap and Joe De Vance and Jay Washington of Petron.

At 5-foot-9, Alapag, born and raised in Upland, California, is the shortest player to win the league’s highest individual honor since Alaska’s 5-foot-7 guard Johnny Abarrientos, won the award in 1996, the same year the Aces completed the league’s last Grand Slam.

Alapag, who averaged 12 points, 5.5 assists and 3 assists in 59 games so far this season, was quick to give credit to the entire Talk ‘N Text organization for the award.

“I’m accepting the MVP in behalf of the coaching staff and my teammates,” said Alapag. “It’s been a special year so far for us and I wouldn’t have achieved this award if not for them.”

Despite the award, Alapag feels he still has some unfinished business with the Tropang Texters still slugging out with the Petron Blaze Boosters in the finals of the Governors’ Cup.

“It’s a huge honor, especially here in our league with its rich history and thinking about the guys who I looked up to guys like Ricky Brown who I think set the standard for a lot of the Fil-Ams.”