Ginobili’s back and looking for that old magic 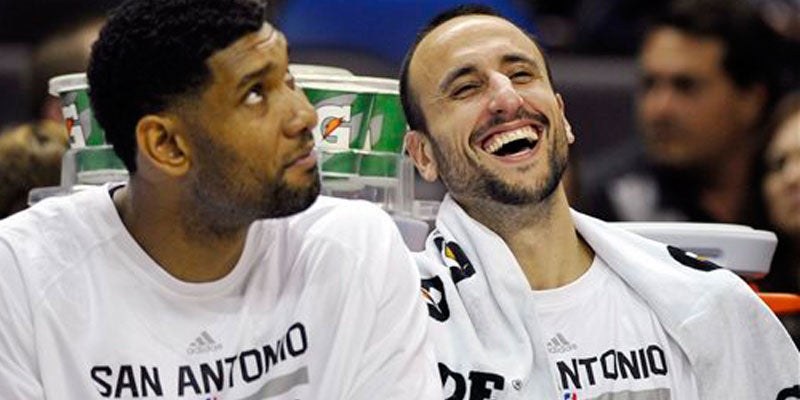 San Antonio Spurs’ Manu Ginobili, right, of Argentina, laughs with teammate Tim Duncan on the bench during the second half of an NBA preseason basketball game against the Phoenix Suns, Sunday, Oct. 13, 2013, in San Antonio. Phoenix won 106-99. AP Photo/Darren Abate

SAN ANTONIO — When it was all over, when the San Antonio Spurs had let their fifth championship slip through their fingers and succumbed to the Miami Heat in a classic seven-game NBA Finals, Manu Ginobili just needed to get away. And he wasn’t sure he was coming back.

He was a pending free agent, coming off one of his most challenging seasons yet and staring his 36th birthday right in the face.

Ginobili sought an escape in the crystal waters and the coral reefs of the Turks and Caicos Islands of the Caribbean, but even paradise can be spoiled when the baggage you packed includes a heavy heart.

The Spurs were five seconds away from winning their fifth NBA title in as many attempts, but a pair of missed rebounds followed by gut-wrenching 3-pointers helped Miami win Game 6 in overtime, and the Heat closed out their second straight championship two days later.

The losses were heartbreaking, especially Game 6, and no one took it worse than Ginobili. Not even a family holiday swimming with his twin sons could make the team’s emotional shooting guard forget what might have been.

“It could have been easier if every single waiter and employee and visitor of that hotel hadn’t watched the finals,” Ginobili said. “Everybody wanted to tell you that they watched it and appreciated what you did and say something about the game. I really appreciated it, (but) I really didn’t appreciate it, but I understood it. It made me remember a lot more than I wanted.”

The Argentine magician has always been the heartbeat of these cold, calculating Spurs, bringing a human element to a machine-like organization and piling up victories along the way. But injuries caused him to miss 22 games in the regular season last year, and he was rarely able to summon the dynamic verve and uncanny playmaking that made him a fan favorite in San Antonio.

He shot under 40 percent in the postseason and had eight turnovers in Game 6 of the finals, when the Spurs were up five points and 20 seconds from closing the series out when the Heat rallied to win it. And when the series was over, he was the only member of the Spurs’ star trio that didn’t immediately vow to come back in 2014.

Given his lengthy history of injuries and erratic performance in the playoffs, Ginobili wasn’t sure if the Spurs wanted him back. It took Spurs general manager RC Buford less than six minutes on July 1 when the market opened to tell Ginobili that he was wanted and needed.

“That’s all I wanted to hear,” said Ginobili, who signed a two-year, $14.5 million deal. “After the finals, (I wanted to know and) understand they really wanted me back. Once I heard that, I said, ‘OK.'”

And Ginobili truly appears to be back.

He is averaging team-highs with 12.5 points, 3.5 assists and 2.5 steals in 21 minutes per game in the preseason. He is once again charging headfirst to the basket for layups and dunks and firing passes to teammates — and occasionally to unsuspecting fans in the first few rows.

“To me, Manu was the best,” said Italian swingman Marco Belinelli, who signed with the Spurs this summer. “This guy can do everything, in Europe and America.”

Most of the Spurs met for dinner during the offseason to commiserate and cope with the finals loss, but the biggest remedy for Ginobili is being back on the court. He admitted to not being ready mentally a month ago. But being back in training camp with his teammates has refueled his “energy bars.”

While Ginobili is feeling spry now, keeping him that way is critical to San Antonio’s fortunes. To help keep him healthy, the Spurs added from free agency a younger version of Ginobili in Belinelli, his former teammate in the Euroleague.

“I think (Belinelli) is a very underrated player,” San Antonio coach Gregg Popovich said. “I consider him to have the same mindset as Manu, which means I’m going to have to be patient as I’ve learned with Manu. Manu taught me to shut up and just watch him play a little more, which is a good thing. And Marco is going to be the same way. They both have the same passion for the game. They have no fear, which most of the time is good, but sometimes it can bite you. But I would rather have that than somebody who is timid.”

Belinelli’s ball-handling and ability to set up the pick-and-roll are expected to lessen the load on Ginobili.

“I’m happy to be playing with him,” Ginobili said. “We are going to be playing together a lot. It’s going to be a great opportunity for us to have fun together and play well. We’ve got to get to know each other. What he’s going to give us is another creator, another generator of situations, he can play pick and roll, he can finish and he can shoot. He’s a very good shooter overall.

“Usually I’ve been the one creating for shooters, so we’re going to be sharing that job so it’s going to be interesting to see how we play together.”