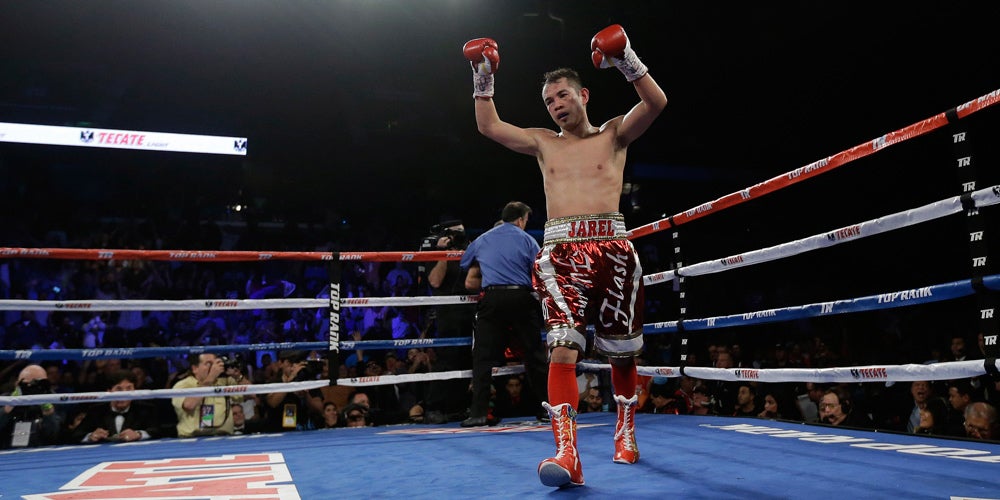 Nonito Donaire celebrates his win over Vic Darchinyan during round 9 of their featherweight rematch, Saturday, Nov. 9, 2013, in Corpus Christi, Texas. Even in the glow of victory, the Filipino boxing star’s first thoughts were about his compatriots caught by a deadly supertyphoon in the Philippines. AP PHOTO/ERIC GAY

CORPUS CHRISTI, Texas—Even in the glow of victory, Filipino boxing star Nonito Donaire Jr.’s first thoughts were about his compatriots caught by a deadly supertyphoon in the Philippines.

In a rematch of former world champions, Donaire stopped Australia-based Armenian southpaw Vic Darchinyan in the ninth round of a 10-round nontitle bout on Saturday to boost his bid to return to boxing’s elite.

Donaire was trailing on two of three judges’ scorecards when he snatched the victory.

He felled Darchinyan with a left hook, and although Darchinyan rose and continued, he never looked steady. Donaire’s punishing follow-up prompted referee Laurence Cole to call a halt at 2:06 of round nine.

Donaire, Fighter of the Year in 2012, improved to 32-2 with 21 knockouts. He bounced back from a loss to Cuban Guillermo Rigondeaux in a super bantamweight world title bout in April.

For Darchinyan, the fight was a grudge match, but he was ultimately unable to avenge his 2007 fifth-round knockout loss to Donaire—his first career defeat.

Both fighters hurt each other with heavy blows in the second round.

A furious exchange at the end of the fourth round had to be broken up after the bell, and the toe-to-toe action continued in the fifth with Darchinyan seeming to have the edge.

Donaire, who had a right shoulder surgery after losing to Rigondeaux, looked tentative at times. He admitted there was a moment when he wasn’t sure he could continue.

“When he hit me in my cheek, I felt like he broke my cheek,” Donaire said. “Part of my mind was like, ‘Is this it for me? I’m losing the fight. Should I keep going?’”

In the crucial ninth round, Donaire floored Darchinyan with a powerful left hook and a right.

Darchinyan was up quickly, but his legs were wobbly. Donaire was hammering away with left and right punches when the referee stepped in.

Donaire stopped Darchinyan in the fifth round in 2007 in Connecticut to claim the International Boxing Federation (IBF) flyweight crown, the Asian star’s first world title.

On the same card on Saturday, unbeaten American Mikey Garcia survived a second-round knockdown to knock out Roman “Rocky” Martinez with a left hook to the body in the eighth round and take the Puerto Rican’s World Boxing Organization super featherweight world title.