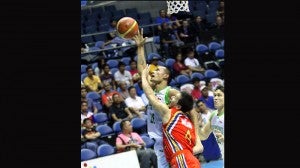 Mercado and Washington combined for 50 big points for the Batang Pier, while Garcia — the other rookie to shine aside from Terrence Romeo — chipped in 12 and the three conspired for all but two of their last 20 points.

“Everyone responded well after the two losses,” said head coach Ritchie Ticzon. “We were able to execute our defensive game plan which has been our focus.”

Globalport had just enough breathing room down the stretch, widened by a triple from Garcia with just a little over a minute to play, 87-82.

“Everybody knows he has it. That’s why he was in the end game,” said Ticzon of Garcia, the former UAAP MVP who was just behind Romeo, who was held to a season low of four points.

But even with the super rookie scoring below his average so far, the Batang Pier managed to get back on the winning track for a 2-3 record.

The Bolts, who even tasted the lead a couple of times, just couldn’t get nearer than two points in the last five minutes of play even with prime scorers Gary David and Mike Cortez on the floor.

David and Cortez each had 18 points and combined 14 in the fourth for Meralco, who had its winning streak snapped for a 2-3 card.