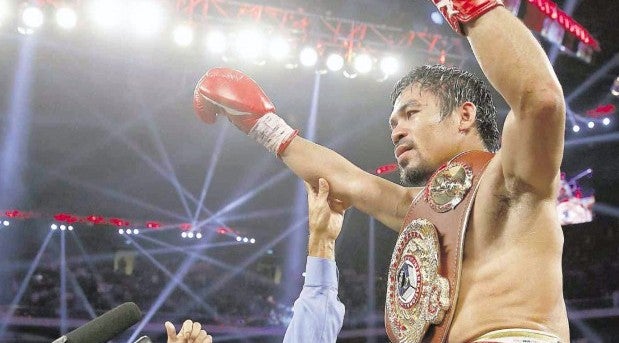 The story is told about a local leader who volunteered to join Sarangani Rep. Manny Pacquiao’s campaign team, vowing to deliver votes for a steep budget of P16 million.

The man allegedly walked away with the money, leaving poll watchers unpaid and angry at the boxing icon, who still went on to win a second term in May.

The campaigner sought forgiveness and is back in the fold, said Jeff de Guzman, a Los Angeles-based respiratory therapist and an erstwhile member of Team Pacquiao.

“[Manny is] the one telling this story,” De Guzman told the Inquirer.

Buhay Rep. Lito Atienza, regarded as a “second father” to Pacquiao, recalled another instance when a couple from the United States allegedly defrauded the boxing superstar of some $100,000. Like the Sarangani campaigner, they were eventually forgiven.

But this same attitude of seemingly bottomless giving—and forgiving—has worried many of Pacquiao’s supporters.

“It’s always a good quality, but it’s also a weakness if you keep allowing these things to happen,” Atienza said. “I’m sure he was victimized a couple of times. With his good heart, he’s a prime target of exploitative people.”

Michael Joseph Cabuhat, Pacquiao’s former US accountant, said he noticed an “abnormal clearing of checks” while his company, VisionQwest Accountancy Group, was examining the boxer’s finances from 2010 to 2011.

“We saw an abnormal clearing of checks,” he said. “So if these things were happening, I wanted to close the account because I didn’t know how many more of such cases were happening.”

The ring legend of Pacquiao, boxing’s only titlist in eight different weight divisions, is matched by the ethos of his generosity, sometimes to a fault.

Before his blockbuster bout with England’s Ricky Hatton in 2009, Pacquiao staged a much-publicized “weight-loss challenge” among members of his Wild Card entourage.

“Pacquiao had to pass out nearly $80,000,” reported ESPN’s Tim Keown, who added that “the competition was marred by allegations of Lasix and even liposuction.”

The amount, roughly P3.4 million today, didn’t seem to matter considering Pacquiao’s reported guaranteed purse of $12 million then. It was easy money for Pacquiao, who needed only two rounds to knock Hatton out cold.

Pacquiao has been the House of Representatives’ richest member since he was first elected in 2010 as Sarangani’s lone representative.

A bulk of his income comes from purses and pay-per-view shares generated from his US bouts. In 17 fights since 2006, Pacquiao earned a total of $188.5 million from just guaranteed purses. Of the fights, 15 were held in the United States.

In his 2010 statement of assets, liabilities and net worth (SALN), Pacquiao reported a net worth of P1.13 billion. His assets then consisted of P397.9 million in real properties and P736.3 million in personal and other properties.

He did not report his liabilities.

In his 2012 SALN, Pacquiao reported a net worth of P1.77 billion—P2.03 billion in total assets and P258 million in liabilities.

But the size of his earnings is almost matched by the ease with which he spends his money. His boundless spending was also in full display during basketball games.

After the game, someone from Team Pacquiao was seen distributing wads of cash to the players, who were then told to proceed to a nearby restaurant for dinner.

Pacquiao’s wife Jinkee is also known for her lavish spending.

“That’s the way they are,” he said. “Every time they go out, it costs them money.”

“He was that generous,” De Guzman said. “The problem with him is he doesn’t know how to say ‘no.’”

Pacquiao’s generosity may be legendary, but it also had an impact on his taxes in the United States.

“In fairness to Manny, he’s really generous and kind,” Cabuhat said. “But he has to do it the right way.” With reports from Inquirer Research