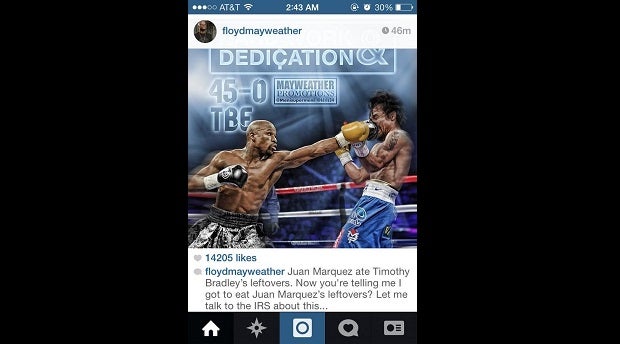 Floyd Mayweather Jr. is at it again.

The undefeated American boxer posted a manipulated photo of him connecting on a jab to Filipino ring icon Manny Pacquiao yesterday and hinting on the eight-division champion’s problems with the US Internal Revenue Service (IRS).

On his Twitter account (@FloydMayweather), “Money” Mayweather wrote: “Juan Marquez ate Timothy Bradley’s leftovers…” followed by a second tweet: “… Now you’re telling me I got to eat Juan Marquez’s leftovers? Let me talk to the IRS about this…”

Mayweather’s latest dig touches on Pacquiao’s purported tax woes, with the IRS issuing a levy on the Pacquiao’s US bank accounts in an effort to recoup more than $18 million in alleged tax liabilities from 2006 to 2010.

The IRS levy came after Pacquiao was issued a separate “notice of federal tax lien” in the amount of $18,313,669. The notice was issued by the Glendale office of the IRS in Los Angeles, California, on Nov. 22.

Pacquiao’s camp, however, on Wednesday insisted that the “IRS liens on his properties and bank accounts” had been “vacated” (lifted) late last week.

“We have been told that the IRS liens on his properties and bank accounts were vacated on Dec. 20,” Pacquiao said through through his Philippine lawyer, Tranquil Salvador, in an e-mail sent to the Inquirer.

Mayweather posted a collage of photos that aired his take on the megabout vs Pacquiao that doesn’t look like it’s going to happen anytime in the near future.

The first picture in the collage depicts Mayweather offering $40 million to Pacquiao. In the next frame, Pacquiao rejects the offer. The third frame recalls Pacquiao’s stunning sixth round knockout loss to Marquez.

The collage ends with Pacquiao in a praying pose with the caption, “Dear God, Please have Floyd call me again.”

Floyd posted the “meme” with a caption that read: “This is my Christmas card to the world… Happy Sleepy Holidays zzzzzzzzzzzz.”

Pacquiao fans retaliated with a collage of their own while the boxer chose to take the high road, refusing to be drawn into any word war with Mayweather.

“I’m thanking Floyd Mayweather that he has not forgotten me. I’m glad that he is still thinking of me,” Pacquiao told the Inquirer.

“Christmas reminds us of God’s greatest love for us. He teaches us to love even our enemies. So, I won’t say anything that would hurt anybody,” he added.