Filipino skater Michael Martinez makes it from mall to Olympics 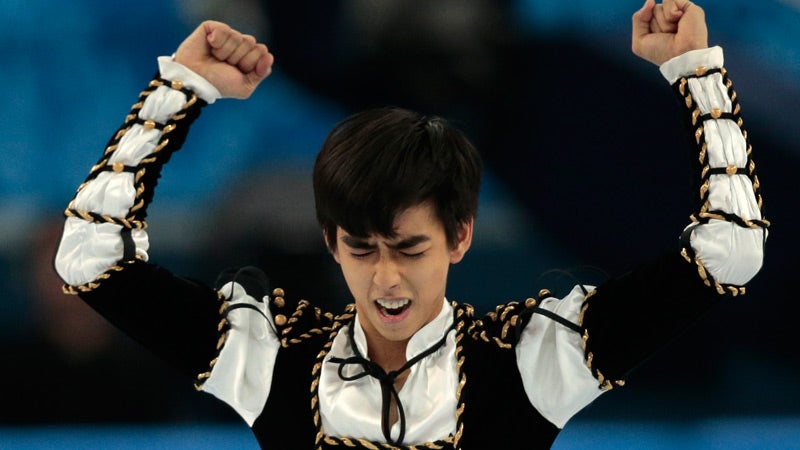 Michael Christian Martinez of the Philippines reacts after competing in the men’s short program figure skating competition at the Iceberg Skating Palace during the 2014 Winter Olympics, Thursday, Feb. 13, 2014, in Sochi, Russia. AP

SOCHI, Russia—Michael Christian Martinez nailed the bow at the end.

Four bows, to be exact, though no one could blame him. He didn’t seem to want to leave the ice Thursday night, and no one was going to blame him for that, either.

This wasn’t the shopping mall in the Philippines, where he learned his jumps and spins while trying to avoid parents and their kids skating by on family outings. This was the Iceberg Skating Palace and this was the Olympics, where the teenager was desperate for the skate of his young life. Michael Christian Martinez holds up a jacket with ‘Philippines’ on the back shortly after he made his Olympic debut Thursday in Sochi, Russia. AP

He had less than three minutes to prove himself in the short program and make it to the men’s free skate final.

If he didn’t, he might have to be thinking about the next step, perhaps working for his family raising vegetables to sell to Japan.

Only Filipino in Sochi

The expenses had become too much. The mall had contributed some money, but in the aftermath of Typhoon “Yolanda” (Haiyan) there wasn’t much the government could do for a figure skater, the nation’s only competitor in Sochi.

The family home had already been mortgaged to pay for his skating. There was no more to give.

“We’re hoping he makes it and some companies support him,” his mother, Maria Teresa Martinez, said. “Otherwise he will just have to stop. We cannot afford it anymore. It’s just so expensive and we can’t do another four years.”

In a sequined and braided black and white outfit donated by a designer in New York who saw his Facebook plea for proper Olympic attire, Martinez took the biggest stage of his life, skating just two spots before the great Evgeni Plushenko was supposed to go in front of a capacity crowd at the Olympic arena. He acknowledged the polite applause, gliding to the center of the ice. He paused, struck a pose, and then began the most important skate of his career.

He had reason to be. At 17, he is the youngest skater in the program and the only Filipino figure skater ever in the Olympics.

Still, Martinez was sure he would prevail. The gangly kid with the mop of black hair had to, because this has been his life ever since he walked by the rink in the Manila mall at the age of 9, saw the skaters, and declared to his mother that this was something he wanted to do.

He fell on his behind that day, but that didn’t stop him from coming back the next. Neither did the asthma that put him in the hospital many times and kept him from playing sports outdoors.

“I will make the free skate,” he declared after practice the night before. “Because I am prepared.”

Preparation, though, only counts so much. So on his Facebook page, Martinez asked his friends to “Please pray for me.”

He began his skate by hitting a nice triple axel, drawing applause from the crowd. But on his second jump he didn’t finish the rotation on a triple lutz and triple toe loop, lowering his marks from the judges.

But his spins were good, the rest of the program nicely skated. Most importantly, he didn’t look like a 17-year-old making his Olympic debut.

In 2 minutes and 39 seconds, Martinez showed he belonged. And now all there was to do was to wait.

“I’m very happy and proud,” he said. “I missed just one jump but the rest of the program was good.”

In the kiss-and-cry area, Martinez waved his jacket with “Philippines” on the back to the crowd, drawing cheers. He sat with the Russian coach his mother — who learned skating along with her son so she could save money by coaching him herself — had hired for him, flashing a thumbs-up sign as his score was posted.

It was 64.81, his best ever. But Martinez would have to wait again to find out whether it would be good enough to be one of the top 24 skaters who make it to the free skate.

Nearby, though, some of the other early skaters were struggling. Some fell trying jumps, others made mistakes that lowered their scores.

Plushenko himself fell on a triple axel in warm-ups, hurting his back and ending his bid to add another medal on home ice to the four he already won.

Suddenly, the math was starting to look good. Martinez had made it in.

For one night at the Olympics, that’s exactly what the kid from the mall was.