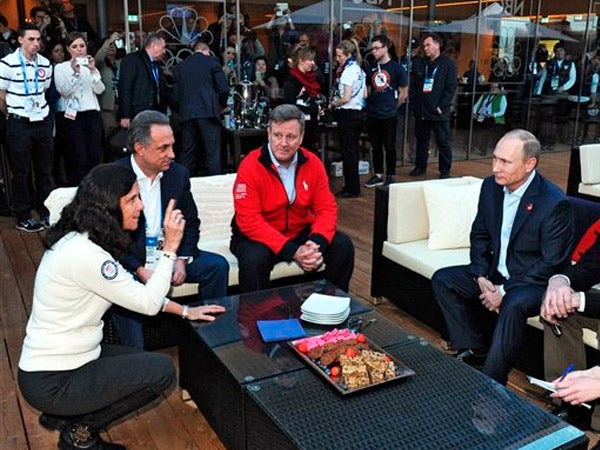 SOCHI, Russia —In a powerful symbol of international sports detente, Russian President Vladimir Putin dropped in on US Olympic headquarters Friday to chat about the Winter Games and the upcoming Russia-US hockey showdown.

He even wore a red “Happy Valentine’s Day from Team USA” pin on his lapel.

Putin spent about half an hour at USA House in Sochi’s Olympic Park, sitting on a couch talking with US Olympic Committee chairman Larry Probst and CEO Scott Blackmun. From there, he made a stop at Canada House next door.

“Putin was very gracious,” Blackmun told The Associated Press. “What I would remember is it sends a strong message about the importance of sport to Russia.”

The Russian leader looked relaxed, wearing a dark jacket with an open-collar light blue shirt. He had a glass of red wine as he asked the Americans about their experience in Sochi so far.

“We talked about mostly our impression of the games,” Blackmun said. “He was very interested in knowing what we thought about the level of infrastructure, the level of services. … We complimented him on the great operations so far.”

Putin’s visit offered a sharp contrast with the chilly state of political relations between Washington and Moscow over issues that include Ukraine, Syria, Edward Snowden, gay rights and human rights.

President Barack Obama is not the attending the games. In what is seen as a snub, the U.S. delegation to the Olympics does not include a president, former president, vice president or first lady for the first time since 2000.

But global politics took a back seat Friday as Putin turned up the charm during a visit that appeared calculated to defuse tensions and soften his image, but remind everyone he is the central force behind Russia’s games.

He sat with the U.S. team officials on cream-colored sofas in an open-air terrace in the center of the USA House, as American athletes, families, sponsors and fans looked on.

“He was genuinely interested in whether we were having a quality experience at the games,” Blackmun said.

The conversation touched on Saturday’s preliminary round men’s hockey game between the Americans and Russians. The game has revived memories of the “Miracle on Ice,” when the U.S. beat the Soviets to win the gold medal at the 1980 Games in Lake Placid.

“Naturally we will root for our own, but we know how many of our athletes play in the NHL,” Putin told the Americans, according to Russian news agencies. “I promise you we have a lot of fans who love and know American players.”

He may be among them, and Putin is expected to attend the game.

Putin praised the performance of US athletes in Sochi, even though the Americans are struggling in many sports where they expected to do well.

“What I like about your team is that you have a strong participant in practically every discipline, and it’s an even team racing for medals,” he said.

Putin also thanked the US for supporting Sochi’s Olympic bid. Sochi was awarded the games in 2007 after Putin traveled to Guatemala to lead the bid presentation.

“I remember how well the US representatives considered our presentation in Guatemala. We remember that, and are thankful to our American friends for the support,” Putin said.

Putin’s visit to USA House started with some American athletes saying “Welcome!” to him in Russian. He answered “Thanks!” in English, according to Russian news agencies.

USA House is a haven for American officials, VIPs, athletes, sponsors, families and guests to relax, eat and drink. The space is shared with NBC, which is broadcasting the Olympics in the US.

Blackmun said Putin “asked whether NBC is happy,” so Probst invited Gary Zenkel, the president of NBC Olympics, to join their discussion.

After the U.S. visit, Putin walked across a grassy patch to the adjacent Canada House, a white building with a huge red maple leaf painted on the side.

Putin gave a short speech in Russian to cheers from the Canadian crowd, saying “Thank you very much, hope to meet you in the (men’s hockey) final.”

A cluster of American and Canadian students later excitedly shared stories about their chance encounter with Russia’s leader.

“I got to shake his hand!” said Daniel Saltman of Los Gatos, California.

Medical student Hannah Glinter of Winnipeg, Canada, said she followed him into Canada House, slipping in behind his bodyguards.

“He’s not nearly as scary as I thought he would be. But his security is quite scary,” Glinter said. “I can’t speak for his personality whatsoever, but he shook my hand twice, so he must be friendly.”