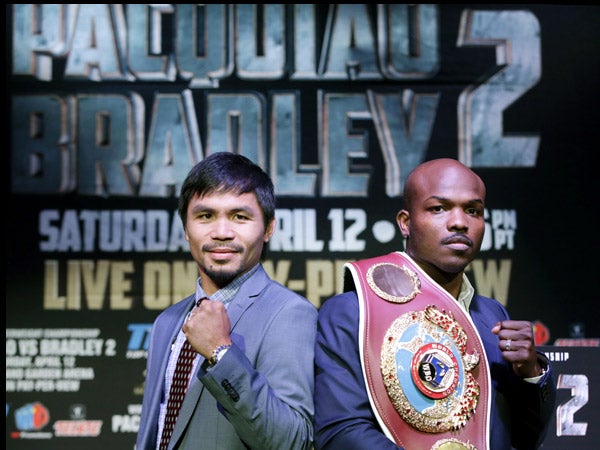 Boxer Manny Pacquiao, of the Phillipines, left, poses for a photo with current WBO World Welterweight champion Timothy Bradley of Indio, Calif., during a press conference Thursday, Feb. 6, 2014, in New York. The pair will face off in a title fight in Las Vegas, April 12, 2014. AP

Nevada Athletic Commission chairman Francisco Aguilar announced the development on Saturday while Top Rank honcho Bob Arum said he would fund the cost of the rigorous and enhanced testing.

The series of tests will be handled by the World Anti-doping Agency and will include carbon isotope ratio testing and isotope ratio mass spectrometry to detect exogenous testosterone.

It will also administered on fight day at the MGM Grand Garden Arena.

“It’s complete WADA testing of everything from soup to nuts, the results will go to the commission,” Arum said in a report by The Ring’s Lem Satterfield.

Pacquiao has started his training here in the Philippines, but Arum said the testers would still able to collect samples from the Filipino boxing champion.

Bradley and Pacquiao will be disputing the WBO Welterweight title. The last time they met in June 2012, it ended in a controversial split decision win by the American boxer.