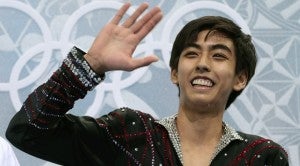 Communications Secretary Herminio Coloma said they already received a courtesy call request from the Philippine Sports Commission and it is up to the Office of the President to set a meeting.

However, he explained that it might not happen within the week because of Aquino’s busy schedule.

(We should understand that the President has a hectic schedule this coming week because of the Edsa celebrations and his state visit to Malaysia. But we’ll see when it could be scheduled.)

Filipinos and the rest of the world were pleasantly surprised when the 17-year old boy from a tropical country qualified for the 2014 Winter Olympics in Sochi, Russia. Martinez finished in 19th place more than a week ago.

Martinez’s mother earlier complained that they did not receive support from the government and that her letter to the President was left unanswered.

But Coloma said they did not receive the e-mailed letter, adding it might have ended up in their e-mail’s spam folder.

Nevertheless, he pointed out that while Martinez did not receive enough assistance in the past, he is now receiving “tremendous support from all sectors.”