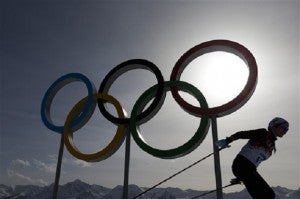 In this file photo dated Thursday, Feb. 20, 2014, a skier passes by the Olympic rings at the 2014 Winter Olympics, in Krasnaya Polyana, Russia. AP

BERLIN—Germany will not send government representatives to the Sochi Paralympic Winter Games to protest Russia’s stance in the Ukraine crisis, an official said Thursday.

However, the German athletic team is already on site and will almost certainly take part in the competition, she said, stressing that Berlin sees no security concern.

Speaking on ZDF public television, she said however that the German foreign ministry had stressed that attending the Games posed no personal threat.

Russia’s President Vladimir Putin will open the Paralympics in the presence of about 1,600 disabled athletes from some 45 countries, but the event will be tainted by his intervention in Ukraine.

Tensions with the West have spiked after Putin supported the seizure by pro-Moscow armed forces of Ukraine’s Crimea region, northwest of Sochi across the Black Sea.