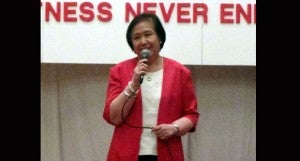 MANILA, Philippines — University of the East relieved Boycie Zamar of his head coaching duties as announced by the school in a statement Saturday.

UE executive vice president and team manager Carmelita Mateo said the management feels a head coach should not have any other commitments with other teams outside of the Red Warriors.

“Mr. David “Boycie” Zamar will no longer be the head coach of the UE Red Warriors men’s basketball team effective April 1, 2014,” said Mateo, the incoming president in Season 77 with UE as host.

“UE Management feels that the Warriors’ head coach must be one who will handle the team full-time, one without commitments to other teams.”

Zamar, who had a second tour of duty as UE coach when he replaced Jerry Codiñera midway through Season 75, also serves as an assistant coach of the San Miguel Beermen in the PBA and head coach of the Cebuana Lhuillier Gems in the PBA D-League.

“This development allows Mr. Zamar and his coaching staff freedom to attend to their respective commitments outside of the Red Warriors,” the statement read.

The statement also said that UE will announce its new head coach next week.

Zamar, who also ran the UE sidelines in the 2000s, nearly steered the Red Warriors to the Final Four in Season 76 with a 7-7 record.