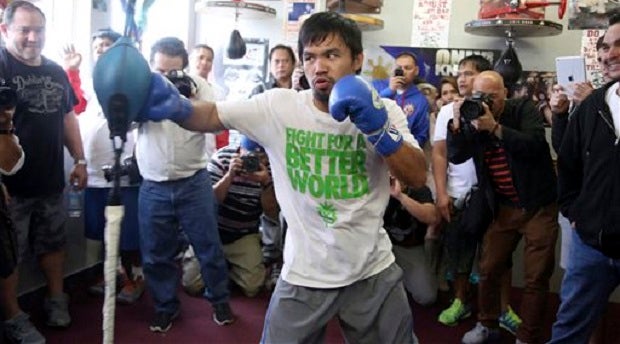 Pacquiao works at a frenetic pace and is making his sparring partners earn their keep.

According to Fernandez, who serves as assistant trainer, it’s been more than 10 years since he saw Pacquiao display such fire, bordering on over-eagerness, as he tries to regain his World Boxing Organization welterweight crown from Timothy Bradley on April 12 at MGM Grand in Las Vegas.

But Pacquiao was quick to clarify that he’s not over-training or overanxious to get back at Bradley, who took the title by a widely lambasted split decision in 2012.

Pacquiao added that he’s satisfied with how the final phase of training went under the supervision of Freddie Roach and the assistance of strength and conditioning trainer Justin Fortune, who reintroduced plyometrics into his regimen.

After his morning run at Griffith Park, Pacquiao overslept and reported at Wild Card 40 minutes late, causing his schedule to overlap with that of Miguel Cotto, the last fighter he stopped in the ring in 2009.

It was a closed-door session, with only a handful let in and picture-taking prohibited.

Pacquiao’s parents, Dionesia and Rosalio, were present. Mommy D, as Pacquiao’s mom is popularly known, said she just showed up to see her son and left after a few minutes with another son, former boxer Bobby.

Tapering off: Pacquiao already at 147 lb