'Heavy in our hearts' | Inquirer Sports

‘Heavy in our hearts’

Day 3: A loss to Chinese Taipei in the 2013 campaign has Gilas suddenly worried about the knockout round.
By: Francis T.J. Ochoa - Sports Editor / @ftjochoaINQ
INQUIRER.net, Philippine Daily Inquirer / 12:00 PM September 02, 2014 Another early deficit. Another third-quarter burst. Larry Fonacier’s hot hands. A 68-55 lead entering the fourth quarter. Rockin’ crowd. Electric atmosphere. An opponent that flew in under the cloud of political turmoil and sporting controversy. A chance for payback. 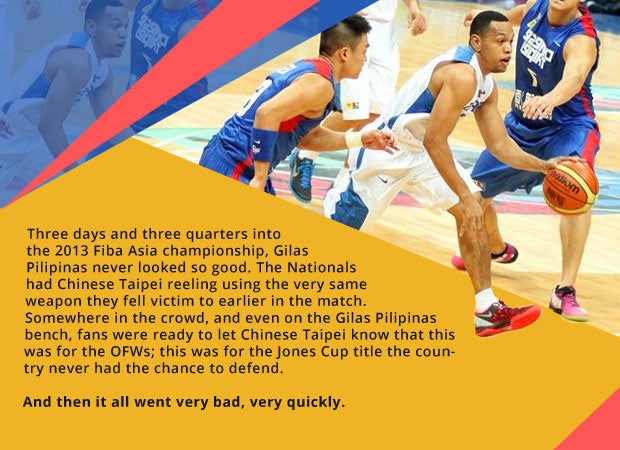 Three days and three quarters into the 2013 Fiba Asia championship, Gilas Pilipinas never looked so good. The Nationals had Chinese Taipei reeling using the very same weapon they fell victim to earlier in the match. Somewhere in the crowd, and even on the Gilas Pilipinas bench, fans were ready to let Chinese Taipei know that this was for the OFWs; this was for the Jones Cup title the country never had the chance to defend.

And then it all went very bad, very quickly.

In less than two-and-a-half minutes, that 13-point buffer that was supposed to take Gilas Pilipinas home to a third straight victory—and out of harm’s way in the quarterfinals—was reduced to five.

And the Taiwanese hadn’t even hit a three-point shot, their weapon of choice in the tournament, during that lightning rally.

“They hit some tough shots,” said team captain Jimmy Alapag after an 84-79 defeat.

An understatement. That’s basically summarizing the extinction of the dinosaurs by saying a couple of lizards died.

Fonacier knocking down good looks from beyond the arc was hitting tough shots. Ponytailed center Tseng Wen-ting hitting a three-pointer off the glass under shotclock pressure late in the game was fate intervening with the Gilas Pilipinas’ Fiba World Cup blueprint in a big, dinosaur-extinction way. Interesting times: Jayson Castro finds an opening, but Chinese Taipei still ends up with the win.

Tseng’s triple capped a Chinese Taipei comeback sparked by star Lin Chih-chieh and hard-nosed forward Lu Cheng-ju. The visitors actually had control of the match early on, hitting eight triples in the first half and building double-digit leads along the way. Chinese Taipei, in fact, led 30-19, after the first 10 minutes of the match.

Gilas Pilipinas rallied in the second period, taking the lead on a Gabe Norwood basket with 2:50 to play, 39-38. The team held on to a one-point lead going into the break.

When the third quarter opened, the Filipinos stormed out of the gates en route to building a 13-point buffer going into the final period. But the Taiwanese fought back hard, started finding their targets again and stole the victory.

“This win proved that the Chinese Taipei team never gives up,” said an ecstatic Hsu Chin-che, the Taiwanese head coach. Gilas Pilipinas coach Chot Reyes was in a far less exuberant mood. Made to wait for quite some time inside an interview room where it seemed as if the entire arena air-conditioning had been dumped into, Reyes slammed a palm on the podium desk. And when he finally had the chance to speak, he reeled in the political firestorm that Chinese Taipei used as a reason to revoke the Philippines’ Jones Cup invite.

“First of all, I would like to apologize to our countrymen, our OFWs in Taiwan,” Reyes said. “I know they have been a victim of a lot of abuse.

Months before the tournament, the Philippines and Chinese Taipei were embroiled in a political controversy after a Taiwanese fisherman was shot dead by the Philippine coast guard. The incident sparked a rash of reports of Filipino OFWs maltreated in Taiwan. It also raised emotions—and a lot of security concerns over the Philippines’ participation in the Jones Cup, Chinese Taipei’s prestigious international basketball tournament. In the end, Chinese Taipei deemed it best to revoke the invitation of Gilas Pilipinas, which was hoping to defend the title it won in dramatic fashion in 2012. The revocation did not sit well with the Philippines’ basketball community.

“Had the team participated in the Jones Cup, the players would have been better prepared. It’s one thing to play exhibition matches and another to play actual competitive games,” said Manny V. Panglinan, the president of the Samahang Basketbol ng Pilipinas (SBP), the Philippines’ national basketball federation.

All of that drama between the two countries made Day 3 a penciled play date for basketball fans. And when it ended in a loss, an almost tangible pall of gloom descended at the Mall of Asia Arena.

“The loss meant a little bit more,” said Gabe Norwood after stepping out of a somber locker room. “It weighed heavy in our hearts.”

“It was painful,” Pangilinan said. “I was worried that we might not make it to the [knockout] round.”

Reyes’ statement did not snowball into a diplomatic problem. The Taiwanese reporters told Filipino counterparts that the jubilation back home was more focused on the fact that Chinese Taipei had finally beaten the Philippines after quite some time.  Since the Gilas project started, the Philippines had beaten Chinese Taipei in four previous matches.

Given the chance to reflect on his remark, Reyes put context on that post-game chat.

“For me, I saw a lot of what happened online,” he said. “There were scenes of our flag being burned, people were throwing things at our countrymen. I thought that was the whole situation. Plus, I also wanted to get a lick in for [Chinese Taipei] disinviting us [from the Jones Cup].”

That OFW theme was actually a prevailing one in the Gilas Pilipinas locker room.

“It was really tough,” said Alapag. “We wanted our kababayans in Taipei to know that they were in our hearts and minds during the game.”

But it wasn’t the only talk that followed the loss.

The defeat also sparked a lot of second-guessing among basketball fans, who, like the team, had a full day to chew on what had just transpired; there were no games scheduled the following day. Fonacier was largely responsible for the third-quarter explosion of Gilas Pilipinas, which faced double-digit deficits in the first half. The sweet-shooting Talk ‘N Text swingman knocked down four triples and had 16 points in a 23-11 exchange that built that 68-55 cushion going into the fourth period.

But Fonacier was on the bench when the fourth quarter started.

In the post-match press conference, Reyes fueled the second-guessing when he admitted that he “should have done a better job with my rotation.” But as they say, hindsight is always 20-20. In the heat of the moment, Reyes was faced with two problems: He needed to get the guys who were responsible for digging Gilas Pilipinas out of a hole and into a big lead some rest. He also needed to get gunner Gary David, who had been shooting poorly in the preliminary round until that moment, going.

So why did he have to arm his critics by saying he could have done a better job handling the rotation? “I just had to say something,” Reyes said. “For me, it was to keep the pressure, the dogs, off the players and keep it on me.” He certainly did not want people knocking David, who was slipping into a very vulnerable state as far as his confidence was concerned.

David missed two relatively easy shots during the Taiwanese run, either of which could have changed the fortunes of Gilas Pilipinas. It became clear that he couldn’t find his range; something was missing in his game. And Gilas Pilipinas badly needed some offense at that point. But by the time Fonacier checked backed in, he had cooled off considerably and could not make a shot the rest of the game.

“There are really no words to say,” a glum Fonacier said after the match. “We just have to start from here and get ready for the next round.”

Whatever sense of foreboding that fell like dark curtains on Day 3, however, had little to do with the next round. It had a lot to do with the round after that. The defeat, coupled with eye-popping results in the other bracket, detoured Gilas Pilipinas from the original course it had plotted. Now, the Filipinos were on the path of a struggling superpower, but a superpower nevertheless.  Gilas Pilipinas was headed for a quarterfinal collision with basketball’s feared Great Wall.

“We knew that by losing to Taipei, there was a very, very good chance that we were going to face China in the quarters,” said Alapag.

One loss. That’s what it took to create a major detour in the country’s road map to the 2014 Fiba World Cup. You could draw up several scenarios that would lead to the Philippines qualifying for the world championship in Madrid and none of those would have included losing to Chinese Taipei just three days into the Fiba Asia tournament. In a perfect blueprint, the Philippines would sweep its bracket and take on Kazakhstan in the quarterfinals. The way the groupings were drawn, Iran, China and South Korea where shoo-ins for the top three slots. “To medal,” Alapag said, “you’d need to play those teams anyway. You only hope to play them later in the tournament.

After the loss to Chinese Taipei, Gilas Pilipinas looked like it would play that game sooner.

Day 3 was over. The knockout phase was on Gilas Pilipinas’ horizon and with one defeat, China was suddenly looming.

Part 2: ‘We are playing scared’

Prelude: Marc Pingris, on the edge