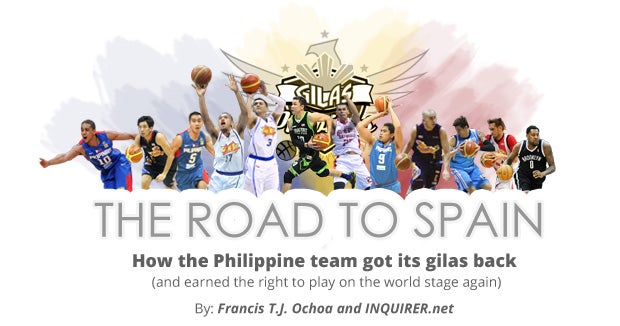 As the clock ticked closer to the start of the quarterfinal round, the threat of Kazakhstan turned from faint, to palpable, to real. The realization began to dawn on players and supporters of Gilas Pilipinas that the knockout phase on the 9th day of the Fiba Asia championship was a blink-and-you’re-done proposition for the adored national squad.

“You realize that it’s the quarterfinals and you’re up against a scary team,” said skipper Jimmy Alapag. “It’s a one-game knockout; you really have to play your very best.”

Manny V. Pangilinan, the president of the Samahang Basketbol ng Pilipinas (SBP), was very much aware of how, all of a sudden, the competition had gone up a notch in the 11-day tournament. “It’s the quarters. Everybody starts to get serious. It’s the knockout phase,” he said.

A press room at the Mall of Asia Arena, home of the Asian championship, that was packed before the Philippine team even walked into the court seemed to back his claim. A little piece of continental basketball history had just been written by Chinese Taipei, which scrubbed off the last remnants of China’s stranglehold on the sport in the region with a 96-78 victory that sent the Great Wall into an apologetic mood.

“It’s time to reflect on the lessons that we have learned,” said long-time China stalwart Wang Zhizhi.

Hsu Chin-che, the Taiwanese coach, called it “a magical day,” and refused to let questions on the political implications of the victory creep into the afterglow of Chinese Taipei’s monumental basketball achievement.

“I’ve played in the national for a long time and it’s always been a blowout [loss against China],” said charismatic forward Tien Lei. “Sometimes, in the first or second quarter, it was almost over.”

This time, the Great Wall fell.

And Pangilinan knew that if his national basketball program wanted to continue chugging straight to Spain for the World Cup, Gilas Pilipinas would have to avert an upset.

“You’re on the brink always,” he said. “If they have a good day and we have a bad day, we could get knocked out. That would be a big shame for the country.” The Filipinos needed a big start.

Jeff Chan and Gabe Norwood gave them one.

Chan, the lefty sniper who started playing the game in sandlot courts in Bacolod, drilled in back-to-back triples while Norwood tossed in four points in a 12-3 start by Gilas Pilipinas. But the party was just getting started. Gary David, his mind cleared by a much-needed return to his hometown in Dinalupihan, Bataan, gave the crowd even more reason to rock the coliseum.

David had scored just 16 points in the entire tournament going into the quarterfinals. With 2:27 left in the first quarter, he drained a triple that gave Gilas a 21-7 lead and every screaming fan in the arena knew he would eclipse his tournament total in this game alone. The former Lyceum hotshot sensed the same thing.

“When I made that first shot, it felt good,” he said. “I knew I had a rhythm going.”

By the time he made his third triple for the night (he went 3-of-5), Gilas Pilipinas erected a 32-13 spread. The Nationals started hot, shrugged off the physicality of Kazakhs midway and then went on a blazing finish to hammer out an 88-58 quarterfinal victory that put them in the Final Four.

“We were expecting Gary to have a breakout game somewhere,” said Pangilinan. “It was a welcome surprise that it turned out to be against Kazakhstan.” The ominous feeling that ushered in the knockout phase dissipated behind David’s 22 points.

“He’s too good of a shooter to stay in a slump,” national coach Chot Reyes said.

A little superstition certainly helped. David later admitted to journalists that a clear mind wasn’t all he brought back from his recharging trip home. He tugged along a few pieces of clothing as well.

“Underwear,” David said, sheepishly. More specifically, underwear he had worn while having big scoring nights in the PBA. He threw in his lucky wristband for good measure. “I wore a few pieces of clothing that were lucky for me in the past.”

As basket after basket fell for David, and as the gap widened behind a Gabe Norwood-led Gilas defense that wore star playmaker Jerri Jonson to just 8 points and 3 assists, the arena rocked even wilder with an electric feeling of positivity crackling in the air. It got so loud that some Kazakhstan players admitted they were affected by the crowd.

“Unfortunately, we could not deal with the pressure from the crowd,” said star Anton Ponomarev. “We are not used to playing in this atmosphere, playing in front of 16,000 people.”

Enforcer Mikhail Yevstigneyev drew the loudest jeers from the arena after engaging Marc Pingris in several spirited, physical battles at the post.

“The crowd really helps us play with a lot of energy,” admitted Reyes.

Before the night was through, though, that feeling of positive energy was replaced by an emotional cocktail of equal parts anticipation, excitement and dread.

Later that evening, a defensively sharp Korean squad capped Day 9 with an impressive 79-52 victory over Qatar, sealing a semifinal showdown with the Philippines. There is a lot of basketball history between both countries, with the Philippines at the receiving end of some of the most painful defeats on the hardcourt in recent years.

“Against Korea,” Alapag said, “it wasn’t just the losses, but the type of losses.”

“It was just as we planned it,” Reyes said. “We knew it was going to be Korea.”

And the basketball nation wasn’t going to have it any other way. If the Philippines were to make an appearance in the Spain World Cup, it would have to do so via Korea. There was simply no other path.

Between the country and its dream, an old nemesis lay in wait.