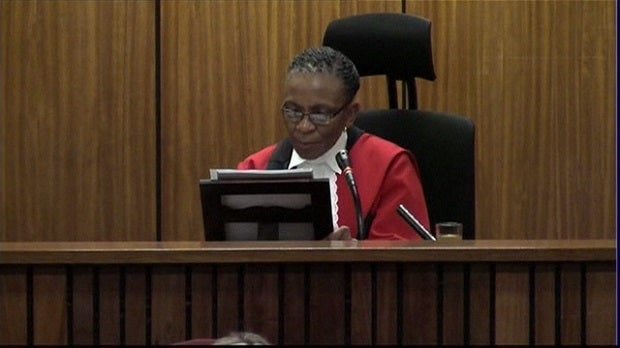 PRETORIA, South Africa — Cleared of murder, Oscar Pistorius on Friday awaited a possible conviction for negligent killing as the South African judge presiding over his murder trial resumed her lengthy explanation of her upcoming verdicts in the killing of his girlfriend.

Judge Thokozile Masipa began proceedings Friday by addressing three separate, gun-related charges against the double-amputee Olympian, acquitting him of one charge of unlawfully firing a gun in public because of what she was said was contradictory testimony by witnesses. She then began commenting on the other charges.

On Thursday, Masipa said there was not enough evidence to support a murder conviction for Pistorius’ killing of girlfriend Reeva Steenkamp. Pistorius fatally shot Steenkamp in his home on Feb. 14, 2013. He said he mistook her for an intruder, while the prosecution said he killed her intentionally after an argument.

The judge has said that Pistorius was negligent, which could lead to a conviction for culpable homicide, or a negligent killing. The sentence for such a crime is at the judge’s discretion, and it can range from a suspended sentence and a fine to years in prison.

On Friday, armed security officers stood at each of the three entrances to the courtroom, while others stood near the red-robed judge as she explained her verdicts from her dais overlooking the court. There were also paramedics in the courtroom.