Judges and instructors from the The National Cheerleading Championship (NCC), the Philippines’ first and only cheerleading organization that is nationwide, give you a break down of the squads fighting to claim the coveted UAAP Cheerdance title. 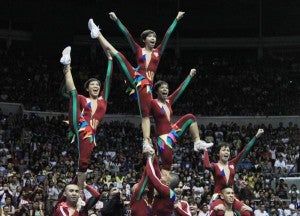 This squad seems to be made for this competition. In the history of the UAAP CDC, no other team has developed such a fearsome reputation. They are the team to beat every year, including this year. A lethal combination of experience, talent, and skills, backstopped by bravado and swagger. The members of the squad are handpicked by the eagle-eyed head coaches and put through a rigorous trainingregimen. You have to earn your invitation to try out for this squad. These days, more alumni look forward to watching this squad perform rather than their basketball team. It will take aperfectly awesome routine to unseat the champs. The Tamaraws are hungry. They feel they’ve been robbed of hard-earned victories in the pasta nd are out to prove they deserve to win. Mixing theatrical flair and hardcore gymnastics skills, the squad has beenp reparing for this moment since they came in second last year. If they can hit their stunts, stay in their spots, and capture the crowd, this may be the year. But they’ll have to earn it. Perfect synchronicity is the key for them. The Tamaraw faithful will be there in full force. The Animo squad comes intot his year’s CDC armed to the teeth. Their prized recruit is 5-time NCAA competition champion coach Rhufa Del Rosario so you know they mean business. They are consistent top 10 finishers in the Nationals, so they know their stunts and tosses. Expect more dance and creativity from the normally traditional routine. Coach Rhufa is known for spectacular tosses and a real flair for the dramatic, so we expect surprises. The Tigers, like UP, are al-ways in contention for the topspot in the CDC. There was atime when it seemed there were only two squads competing. Recently, the Salinggawi seemed to taper off from the CDC, allowing other squads room to rise. Although one of the early pioneers of stunts and tosses in the country, most of the teams have already surpassed them in terms of skill, as they only compete inthe UAAP. Nonetheless, theTigers are still as talented as they come, recruiting the bes tand brightest from the highschool ranks. And because theUAAP CDC still emphasizes dance and props, they might just have enough to stay in the top four this year. The Blue Babble has enjoyed a resurgence in recent years, finishing well in the UAAP and the Nationals. But unlike their counterparts in basketball, they’ve yet to reach championship air. Like their basketball team, they remain unbowed and full of fight. Head coach Randell San Gregorio always handles this team well, entering each competition with the confidence and energy. This year, Ateneo’s recruits include members of TEAM PILIPINAS, which won the Southeast Asian Cheerleading Open in Singapore, so expect the development to continue.People are still talking about the‘moonwalk’ in last year’s CDC.Lets see what they come up with this year.

The Bulldogs are coming to this year’s CDC with a new team, a new coaching staff, and a new attitude. Dismayed by their 7th place finish last year,team managers decided to revamp the squad, recruiting top gymnasts from the Philippine National Games in Bacolod this year. Coached by former FEU stalwarts, expect the team to bring a new flavor to their routine. Like all the other teams in NU, they are in a definite rush to get to the top. This is step two of that climb.

The Falcons come into this year’s competition with a winning attitude. 3-time National champion Arnold Villanueva lends his expertise to the team, which means only one thing: higher expectations.Though this is a rebuilding year for the Falcons, we expect Villanuevaand his team to chisel away the rough edges, slowly honing a championship-calibersquad.Unfortunately, all squads have leveled-up, so although we expect marked improvement, we are also realistic.If Villanueva remains at the helm for a tleast threeyears, expect them in the top three soon.

The UE Pep Squad is coming into the CDC with pretty much the same members as last season. While other squads have beefed up their rosters, hired veteran consultants, and recruited heavily from the high school ranks, the UE Pep Squad seemed content to stand pat. However, this does not mean they won’t pull off any surprises.