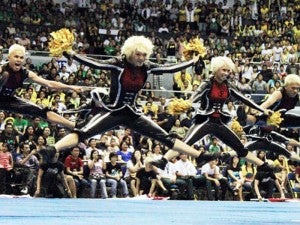 WINNING FORM. Members of the UP pep squad execute a routine from their Madonna-inspired number during the cheerdance competition in the 74th season of the UAAP at the Smart Araneta Coliseum Saturday, Sept. 17, 2011. The state university bagged the top prize for the second straight year with La Salle and FEU finishing first and second runners-up respectively. CELEST FLORES/INQUIRER.net

MANILA, Philippines – University of the Philippines Pep Squad dared to be different, and that set them apart.

Literally shining and striking with the blonde hairdos – UP Pep squad dazzled everyone anew with its edgy and flawless routine as it snared the UAAP cheerdance title for the second straight year.

Notching its seventh overall cheerdance title, it was sparks from the get-go for UP, which rocked the Madonna-inspired theme, opening up with the song Material Girl.

“Our squad could identify with Madonna. We really wanted to wow the crowd and inspire them,” Lawrence Bautista, co-captain of the UP Pep Squad.

De La Salle Animo Squad, on the other hand, defied the odds and edged champions like Far Eastern University and University of Santo Tomas and bagged the first runner-up award.

The Archer warrior-themed routine was enough for La Salle, which has never won a cheerdance title, to zoom to the top three and its best finish in history.

“We were overjoyed when we heard them call us,” said La Salle’s team captain Harriet Mauricio.

Meanwhile, FEU Cheering Squad, which showcased the most breathtaking stunts of the night, remained in the top three – but slid down to second runner-up in the annual cheerdance competition sponsored by Samsung.

The UST Salinggawi Dance Troupe failed to make it to the podium for the second time in the last three years as its slow-paced albeit clean performance warranted only fourth place.

The ballerinas of the Adamson Pep Squad finished fifth, a stark contrast’s from last year’s bottom place while National U Pep Squad, which channeled its inner matadors, came in sixth.

Ateneo Blue Babble Battalion, which struggled with the execution of pyramids and stunts the entire performance, sunk to seventh place while University of the East Pep Squad, which performed a very simple routine, settled with last place.