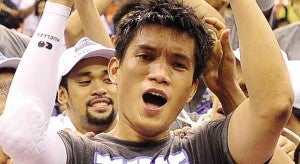 BOCAUE, Philippines – For one of the league’s most decorated players, the entry of boxing champion Manny Pacquiao from the ring to the parquet floor will inject more thrills into the PBA.

Purefoods wingman James Yap said he is excited for the eight-division World Champion’s foray into basketball, a dream that Pacquiao is finally living.

“He’s happy and we are excited for him,” Yap said during a lull in the opening ceremonies of the PBA’s 40th season inside the Philippine Arena.

Yap, a two-time PBA Most Valuable Player, previously spoke with Pacquiao and boxing icon told him about the happiness of fulfilling a dream.

Purefoods’ poster boy, though, had to respond with a kind-hearted jab to the boxer.

“If you only played in the PBA, you might not be as rich as you are today,” Yap said laughing.

A 40th season opens with tribute to PBA forefathers

Selfie with Manny Pacquiao of Kia Sorento during the PBA opening at the Philippine Arena. INQUIRER PHOTO/AUGUST DELA CRUZ