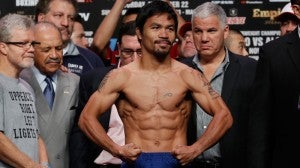 MANILA, Philippines—His colleagues in the House of Representatives are confident Manny Pacquiao, the congressman from Sarangani, will prevail over American boxer Chris Algieri in their match in Macau on Sunday (Manila time).

“He is a very wise fighter. He analyzes well his opponent, thus he knows when and how to attack, and eventually subdue his foe using his dominant punches,” he said.

Aggabao said the Filipino nation would again be united in cheering and praying for Pacquiao, whose resilience and determination are worth emulating.

“We wish Manny good luck, and we are confident about his victory over a younger opponent. Manny has more experience, speed and stamina. We pray for his personal safety and his victory for our entire nation,” he said.

Isabela Representative Rodolfo Albano III said he entertained no doubt that Pacquiao would once again emerge the winner because of experience, rigid training, a well-prepared plan, and strong determination.

“Algieri may be younger and taller but Manny is stronger, faster and wiser. Even Manny’s past opponents attest to his greater powers,” he said.

“Algieri’s overconfidence is a big mistake because Manny will surely defeat him. Manny has never underestimated any of his opponents, be his rival younger, older, taller or bigger than him. He always takes his rigid training seriously,” he said.

“No wonder his speed and stamina has been unmatched over the years. A knockout victory is very possible,” said Madrona.

Abakada Representative Jonathan A. Dela Cruz wished Pacquiao the best during his fight with Algieri.

“I can only wish Representative Pacquiao good luck. I am sure his [athleticism] and spirituality will carry him to victory. He deserves our best wishes. The entire nation will be praying for his victory,” said Dela Cruz, a member of the independent minority bloc.

Pasig Representative Roman Romulo said Pacquiao’s courage, strength and discipline were the key factors to his expected victory. “Manny is very disciplined in sticking to his training regimen. And when he is in the boxing ring, he executes well the game plan against his opponent,” Romulo said.

ACT CIS Representative Samuel Pagdilao said Pacquiao should once again become a symbol of unity among Filipinos on Sunday.

“We do that once more as he now faces a younger opponent and we are confident that with God’s grace, this bout will yet be another victory for Manny and the Filipino people,” he said.

Now on his second term, Pacquiao ranks high among the representatives with the most absences. In the first regular session of the 16th Congress, he showed up on only 38 session days out of 69.

He has authored 14 bills and resolutions, mostly sports-related.