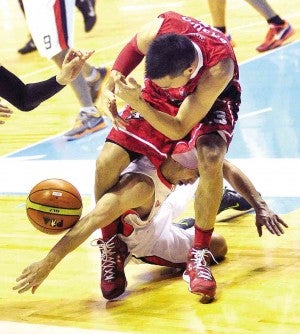 Efficient offensively and unforgiving on the other end, Alaska humbled Meralco, 87-69, again last night to barge into the Final Four of the PBA Philippine Cup at Smart Araneta Coliseum.

The Aces opened up a 15-point lead after the first period and held the Bolts—a team they whipped by 41 points in the eliminations— to a paltry 25 at the half to take a 22-point advantage into the third period.

Up next for the gung-ho Aces is Rain or Shine, the squad which knocked them out of outright Final Four qualification. Their best-of-seven series for a place in the title playoffs could start as early as Thursday at Mall of Asia Arena in Pasay.

Vic Manuel scored eight of his 17 points and Dondon Hontiveros shot six of his 13 in the first period to send the Aces to a rip-roaring start the Bolts were never able to recover from.

John Wilson paced Meralco with 16 points but the other big contributors like Gary David, Jared Dillinger and Cliff Hodge were held to harmless numbers, tallying just a combined 15 points.

“I think the story of the game was our (hot) start,” Alaska coach Alex Compton said. “If in one half, your opponent scores just 25 points and you have a 22-point lead, you have a great chance.

“These guys defended so hard,” added Compton, who was seated beside Calvin Abueva during the customary press-room interview with the game’s winning coach. “That’s how we won the game.”

Abueva, who scored just five points but had nine rebounds, said the Aces’s duel with the Elasto Painters “will be a great series.”

“We were hurt when they took No. 2 slot (in the eliminations),” the former Rookie of the Year added. “We will give it our all to make the championship.”

Talk ‘N Text and crowd-favorite Barangay Ginebra will dispute the last semifinal slot tomorrow, with the winner advancing to face tournament No. 1 San Miguel Beer in the Final Four.