#InquirerSeven Faces of Pacquiao outside the boxing ring 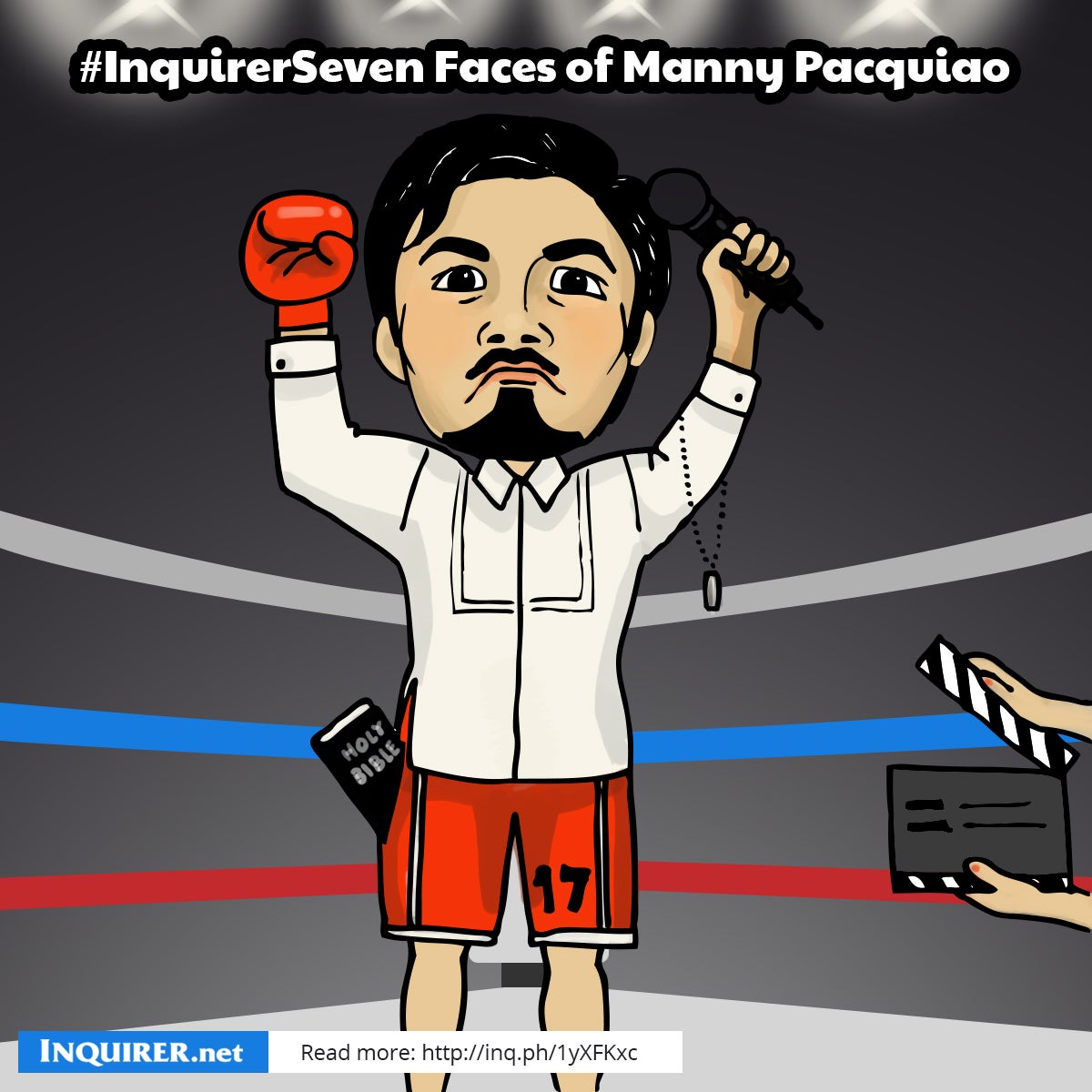 MANILA, Philippines – The country’s beloved “Pambansang Kamao” (National Fist) turned 36 Wednesday amid talks that the much-anticipated fight between Manny Pacquiao and undefeated Floyd Mayweather Jr. will push through in 2015.

But Pacquiao has extended his career beyond his status as the first and only eight-division world boxing champion.

While we await his next superstar match, here is the #InquirerSeven list of Pacquiao’s various accomplishments outside the boxing ring, feats that prove that anything is possible with perseverance (and a LOT of money).

Prior to his current rank in the reserve force, he started out as a sergeant on April 27, 2006, before moving up to technical sergeant on Dec. 1 that same year and master sergeant on Oct. 7, 2007. Two years later, Pacquiao was given the special rank of senior master sergeant in honor of his accomplishment as the pound-for-pound king in the world.

2. Player-coach in the PBA

On Oct. 4, Pacquiao was met with a hail of skepticism when he went into basketball as a player-coach. Its no small feat to follow in the footsteps of Philippine basketball legend Robert Jaworski.

Pacquiao stepped onto the court as a starter for PBA newbie Kia Sorento, the team he’s also been coaching since April 2014.

Pacquiao at jersey No. 17 was drafted 11th in the 2014 draft by his own team, making him the oldest player drafted at 35 years old. And while the point guard—with the help of four assistant coaches—has brought his team only one win this current season, Filipinos can’t help but watch everytime Pacquiao plays on the court just as much as when he enters the ring.

Pacquiao is also an honorary member of the Boston Celtics as of March 2010 as well as owner of the PBA D-League team MP Hotel Warriors.

Pacquiao loves to entertain an audience beyond sports. Pacman has made no secret his love for singing, and tales have been told about his house parties with full-on karaoke sessions that lasted till the wee hours of the morning.

And because he can, Pacquiao immortalized this passion for singing in the albums “Laban Nating Lahat Ito” (2006) under Star Records and “Pac-Man Punch” (2007) under MCA Records, the latter of which contains only one song with accompanying remixes and a minus one track.

His latest single, a 2011 remake of Danny Hill’s “Sometimes When We Touch,” has a rating of 4 out of 5 stars on iTunes.

“Lahat tayo pwede maging superhero (All of us can become a superhero),” his character said in the 2009 movie “Wapakman.” Pacquiao certainly proved he could be one, too, in this first starring role as an ordinary man who assumes the identity of fictional superhero Wapakman after surviving a car crash and exposure to an organic substance that grants nuclear-like powers.

The film, likely an ode to both his powerful punches—cue the “wapak” sound effect—and his Pacman nickname, tanked during its run at the 2009 Metropolitan Manila Film Festival.

Pacquiao has also served as inspiration behind at least two feature films: the 2006 drama “Pacquiao: The Movie,” starring Jericho Rosales in the title role, and the upcoming documentary “Manny,” narrated by Liam Neeson.

Second (and third) time’s the charm for Pacquiao and his political career, having served as representative of Sarangani province—the hometown of wife Jinkee Pacquiao—since May 2010 after losing in the race to represent the first district of South Cotabato province in the 2007 elections.

He has since made General Santos City his home base, where he lives in mansions he put up in Barangay Lagao. On Nov. 27, the boxing superstar pledged to donate P295 million of his earnings as a boxer to build a “house of worship” on a 5-hectare lot in the city.

Speaking of putting up a house of worship in General Santos City, Pacquiao has also made no secret his devotion to God. Right before any fight, the boxer prays in his corner of the ring, eyes closed and head down as he makes the sign of the cross.

“I owe to God everything that I have right now—wealth, health, fame, success, a dutiful and beautiful wife and my wonderful children. I have to give it back to Him,” he had told the Inquirer when asked about why he would build the house of worship.

Born and raised a Roman Catholic, he at one point became Protestant—his mother, Dionisia Dapidran-Pacquiao, had blamed the conversion for his 2012 knockout to Mexican Juan Miguel Marquez. It was after that loss that, Pacquiao said, he shunned his previous lifestyle of gambling and girls in favor of Bible-reading sessions.

Pacquiao classifies himself an evangelical Christian.

He is also son to the ever passionate Dionisia, nicknamed “Mommy Dionisia” or “Mommy D,” another cult personality all on her own.

At many points in his career, Pacquiao was viewed a gambler and womanizer, fueling rumors that Jinkee had even asked for a divorce right before his 2012 fight with Marquez. In the span of two years, however, Pacquiao said his newfound faith prompted him to be a better son, husband, and father.