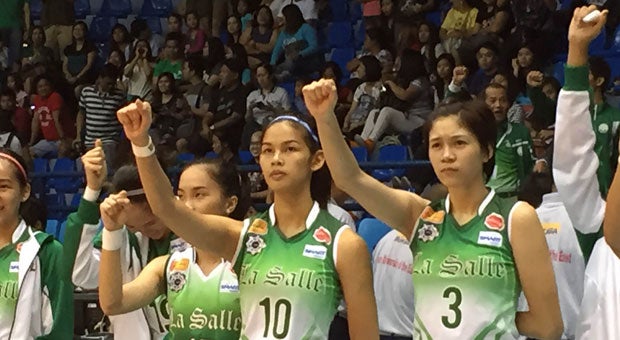 MANILA, Philippines-It was a quick afternoon for the De La Salle University Lady Spikers as they thrashed the Adamson University Lady Falcons, 25-13, 25-15, 25-17, to notch their 12th win in the UAAP Season 77 Volleyball Tournament Sunday afternoon at the Arena in San Juan.

La Salle stayed in second as Ateneo remained unbeaten in 13 games while Adamson dropped to fourth seed in a tie with the University of the Philippines.

An 8-2 run in the third set propelled La Salle to the victory.

La Salle head coach Ramil De Jesus said they would use their momentum from this win for their match against defending champions Ateneo on Wednesday.

“At least we have a pattern, a momentum when we face Ateneo for our next match,” De Jesus said whose team lost a five-setter against the Lady Eagles in the first round. “We have something that we will bring on Wednesday.”

Ara Galang started off the run with back-to-back crosscourt kills to put the Lady Spikers up 18-15 in the decisive set.

Galang, who led La Salle with 20 points, then gave her team the match point, 24-17, with an attack that bounced off the Adamson blockade.

Carol Cerveza then found the spot that left Adamson dumbfounded to seal the win.