Pacmania sweeps PH ahead of superfight 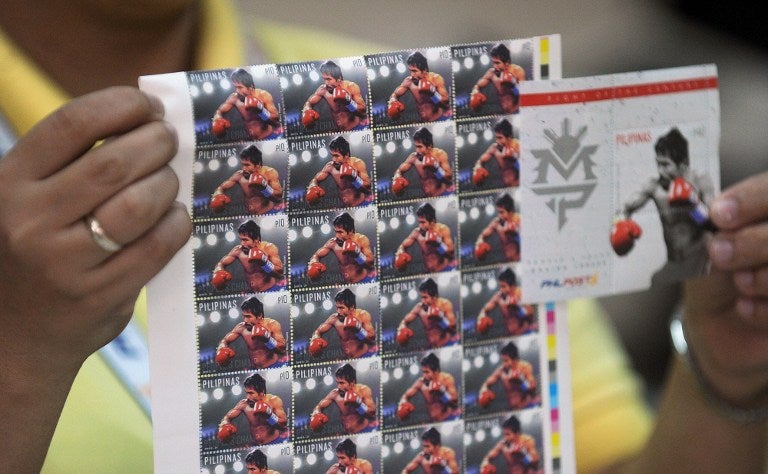 A post office employee shows commemorative stamps of Philippine boxing icon Manny Pacquiao in Manila on April 21, 2015. Manny Pacquiao’s face is on shirts, dolls and postage stamps, his life story is playing in movie houses and millions are getting ready to party as the Philippine boxing hero’s “fight of the century” nears. AFP PHOTO/JAY DIRECTO

MANILA, Philippines–Manny Pacquiao’s face is on shirts, dolls and postage stamps, his life story is playing in movie houses and millions are getting ready to party as the “fight of the century” nears.

Pacmania is sweeping the Southeast Asian nation of

100 million people ahead of the May 2 (May 3 in Manila) Las Vegas bout against unbeaten Floyd Mayweather Jr. to decide who is the best boxer of their generation.

“The mood is upbeat. Of course, it’s the fight of the century,” film producer Lucky Blanco told Agence France-Presse.

Blanco is a coproducer of the Pacquiao film, “Kid Kulafu,” now showing at scores of theaters across the country and a high-profile scene-setter for the world’s richest fight.

For many, the 36-year-old Pacquiao, winner of eight world championships in different divisions, symbolizes their hope of escaping the grinding poverty that afflicts one in four of his countrymen.

The movie tells the story of a runaway high school dropout who, years before becoming a ring legend, sold doughnuts on the streets and stacked shelves with “Vino Kulafu,” a cheap Chinese wine brand.

Years later, as he became one of the world’s richest sportsmen and one of the most famous Filipinos, a television network would give the left-hander another name: “The National Fist.”

Pacmania always sweeps the Philippines ahead of his fights, but the intensity dropped in recent years after Pacquiao lost an unprecedented two straight bouts.

He then had three wins, reviving excitement and hopes that Pacquiao still has what it takes to be the world’s best.

But Mayweather is the opponent his fans have always wanted him to fight.

Millions of Filipinos will don Pacman paraphernalia to cheer their idol on live TV screens during the fight, which will take place on a Sunday morning in the Philippines.

Baseball caps, T-shirts, $68 (P3,000) boxing gloves signed by Pacman himself, and $565 (about P25,000) vinyl dolls of Pacquiao boxing against the Disney character Mickey Mouse are flying off shelves.

“On fight day everyone wants to be seen wearing something that will symbolize their support,” Joy Saransate, manager of a Pacquiao-owned Team Pacquiao memorabilia shop.

Government agencies have even been swept up in Pacmania, with the state postal authority releasing half a million stamps of a fighting Pacquiao.

“This is a fitting tribute to his exceptional character and ability that truly unites the nation whenever he fights,” Postmaster General Josie de la Cruz said.

Pacquiao, a sometime actor, politician and professional basketball player on the side, also released a video last week of a new song: “Lalaban Ako para sa Pilipino” (I Will Fight for the Filipino), to be used for his ring entrance in Las Vegas, that is getting widespread publicity in the media.

Whetted by saturation newspaper and TV coverage, and primed by training clips fed through Pacquiao’s official social media sites, Filipinos are clearing their schedules to make sure they will be able to watch the fight.

It will be shown live on pay-per-view television, while local networks also struck an unprecedented deal to air it without ads and on a slightly delayed basis on free television.

However, in keeping with tradition throughout his career, many Filipinos will prefer to watch the fight in public places, including at gyms and parks or in restaurants and watering holes.

A popular pizza chain in Manila is taking reservations for 200 seats at the equivalent of $16 each (P700) so fans can cheer their hero on while swigging beer and munching on buffalo wings.

“Pacquiao fights always pack them in, but this time we expect even more people to come because of the quality of the opponent,” restaurant manager Hershey Ebalo said.

Blanco, the Pacquiao film producer, said he expected the streets of the capital, a sprawling metropolis of 14 million, to be empty on fight day, with criminals also taking a day off.

“Definitely there will be no crime on the streets, just like in past Pacquiao fights,” he said.