Penalosa: Pacquiao may have overworked himself 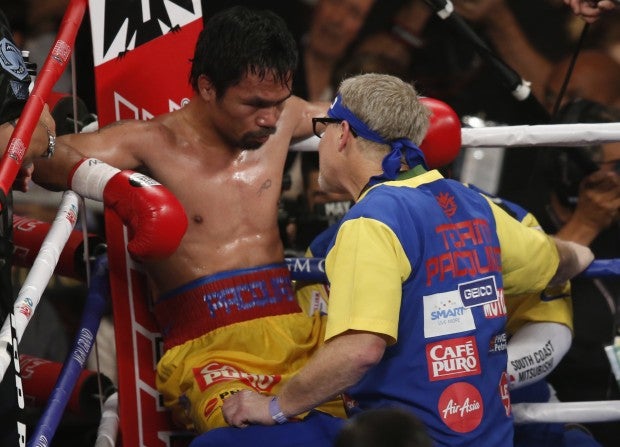 HOLLYWOOD—For a while there, Gerry Penalosa thought Manny Pacquiao would be able to survive adversity in his battle with Floyd Mayweather Jr. Saturday night.

Pacquiao has been telling him all along “Hahampas, hampasin ko yan, (I will keep flogging him him),” Penalosa told the Inquirer Monday night, shortly after Pacquiao’s official bus arrived here after a 6 hour and 45-minute drive from Delano Hotel in Las Vegas

In the fourth round, he saw Pacquiao pummeling Mayweather with various punches as he promised.

Then the attacks suddenly slowed down and he saw the hesitation on his friend’s face.

Penalosa, a two-time world champion hailed by Freddie Roach as the most tactical Filipino fighter, sensed trouble. He knew then that Pacquiao’s right shoulder was hurting.

It was an injury Pacquiao sustained in sparring nearly a month ago, April 4 to be exact, when his right arm and that of a sparring partner got entangled.

Pacquiao and his training team kept the injury under wraps as they were hoping that it would eventually heal in time for fight night, May 2.

Otherwise, they were thinking of postponing the Fight of the Century altogether.

Of course, they were also aware of legal implications that may arise, considering the fight’s magnitude and buildup.

And so they decided to close Wild Card Gym to the public, reasoning out that they were practicing new strategies amid reports of spying by the Mayweather camp.

After a weeklong lull in sparring and hiring new sparring partners, they felt that the injury would heal enough for Pacquiao to be able to sustain the volume punching they intended to throw at Mayweather.

However, Pacquiao’s injury reoccured when he tried to overwhelm Mayweather with punches.

At full power, they may have been enough to hurt Mayweather, but delivered at 60 percent, they never really had devastating effect.

Penalosa’s trained eye also noticed that as the fight wore on, the effort was straining Pacquiao. Mayweather, on the other hand, remained in constant form.

Penalosa realized that his friend, in his desire to beat Mayweather, may have pushed himself in training a little bit too far.

The accumulated excess in running, exercising, sparring and mitts work may have taken their toll.

TAGS: Boxing, Fight of the Century, Manny Pacquiao, Pacquiao vs Mayweather US, Sports