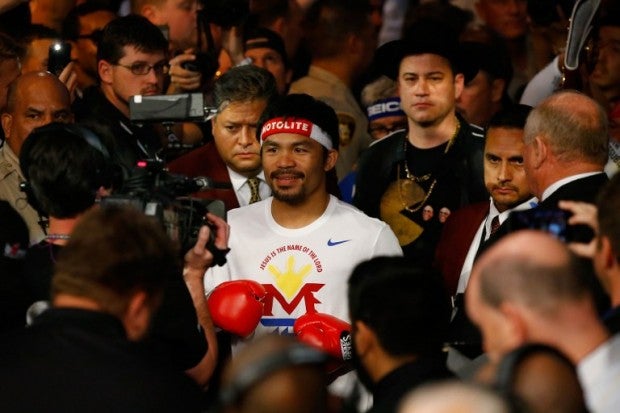 Manny Pacquiao walks to the ring with Jimmy Kimmel before his welterweight unification championship bout against Floyd Mayweather Jr. on May 2, 2015 at MGM Grand Garden Arena in Las Vegas, Nevada. Al Bello/Getty Images/AFP

Over a week after the “Fight of the Century,” Filipino boxing champion Manny Pacquiao is scheduled to arrive in Manila early Wednesday.

Pacquiao boarded Philippine Airlines flight PR103 from Los Angeles on Tuesday with his family and other members of Team Pacquiao.

READ: Pacquiao, family on the way back to PH

A homecoming motorcade has been set for Pacquiao also on Wednesday morning to allow Filipinos to welcome the country’s fighting pride.

The Manila District Traffic Enforcement Unit (MDTEU) said the motorcade is set to start at 8 a.m. following these routes:

According to the previous route, Pacquiao’s motorcade will start at the Pasay Road and then pass through Roxas Boulevard and will end at the Rajah Sulayman Park in Manila.

The Manila Police District has warned of heavy traffic but said that a stop and go traffic situation would be applied during the said motorcade.

Before leaving LA, Pacquiao underwent surgery to repair a torn rotator cuff on his right shoulder.

Pacquiao revealed that he fought with an injury shoulder after his unanimous decision loss to pound-for-pound rival Floyd Mayweather Jr.

After the welcome motorcade on Wednesday, Pacquiao is scheduled to flyback to his hometown General Santos City. Sheen Alfred Limbo/NC/CC