Gilas making progress, but time not on its side 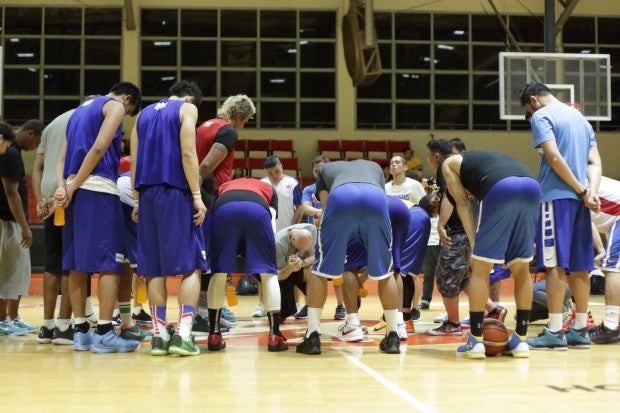 The national team pool is officially in its second week of training as part of its buildup for the 2015 Fiba Asia Championship next month.

Gilas Pilipinas head coach Tab Baldwin has about six weeks to prepare the team the best way he can as it goes for Asia’s lone Olympic berth in China on Sept. 23 and at this point, the American-New Zealander admits there is still much to work on.

READ: Blatche held out of Gilas practice due to injury

“There is progress. In some things, the team is looking better, in some things, we don’t look at all ready and we’re not, we’re not ready yet,” Baldwin admitted after practice wrapped up Monday night at Meralco Gym. “We paid more attention to the offense so our defense works a little bit sloppy right now to me. A lot of work to do.”

The Gilas pool did 5-on-5 drills and participated in a short scrimmage Monday night. Naturalized center Andray Blatche was present but was held out of practice due to an injury.

With 43 days left of preparation, Alapag said the team has no choice but to double its effort and make the most out of the remaining weeks.

“It’s no secret, time is not on our side so we have a lot of work to do in a short amount of time. Guys are working, guys are pushing each other. It will be a little messy, a little sloppy at first but it’s gonna happen, it’s really part of the process,” Alapag said. “But we’re trying to fast track things as much as possible considering the time.”

“We just want to maximize every day and really every practice to get better. And hopefully come Sept. 23, the team’s at their best.” CFC