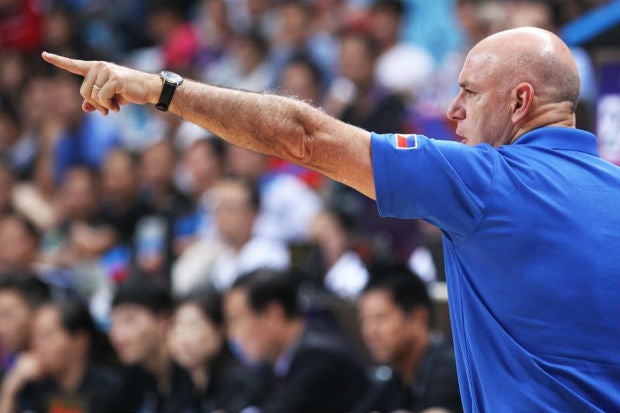 Not that Tab Baldwin doesn’t believe in it, he just believes that it will not work against his gritty Gilas Pilipinas crew.

“Somebody has to have it (homecourt edge), and they’ve (Chinese) have it and they can have it for all I care,” Baldwin told reporters, minutes after sealing a clash for the Fiba Asia Championship gold medal against China on Friday night at Changsha Social Work College gym here.

“Let them (Chinese national team) come and play in front of Philippines fans. Those are real fans,” Baldwin went on, with his next line certain to make him as unpopular as he can be in this country of over a billion people.

“These are fake fans. They don’t know the game of basketball. They just sit up there and cheer when they’re told to cheer.”

China has played to packed galleries each time in the tournament, with the crowd giving its formidable national team a shot of adrenaline each night by jeering the opponents as much as possible.

“Noise is (just) noise,” Baldwin went on. “They don’t bother us at all. What’s it got to do with anything? Nothing. We’re not interested in that.”

READ: Gilas needs all luck it can get in Fiba Asia final vs China, says Iran’s Bahrami

Baldwin even took a jab at how the Filipinos have been treated well ever since the start of the knockout stages on Thursday, when they clashed with Lebanon in the Last Eight.

Gilas Pilipinas loomed as a likely Finals foe for the Chinese after defeating Iran in the second round of the preliminaries and earning a smoother path to the gold medal game.

“China fixed that pretty well,” he said. “They made sure we played (two straight games) pretty late and pushed it (second game) back by half-an-hour. But when you play here you expect that.”

The Filipinos, after playing the 10 p.m. schedule on Friday, will be in the title game set at 8:30 p.m. Saturday, getting less than 24 hours of rest, while the Chinese played the 7:30 p.m. game against the Iranians.

“I’ve been through it before. I know there’s no such thing as a level playing field in China,” he said. Baldwin was the coach of the Jordan team in 2011 in Wuhan which almost completed an upset in the gold medal game only to fall to a bum call that allowed the Chinese to escape with a one-point win.

“So we not only have to beat the Chinese basketball team, but also the other external factors when you come to play in China,” he said. “We have every intention of doing that.

“We will walk out on that court with every belief that we can win that game,” he said. “I mean, I’m pissed already just getting ready to play that game.”

He then excused himself, citing fatigue and the need to prepare for a game plan to scale the Great Wall.

“We didn’t come here to play in the Finals,” he said. “We came to win, so talk to me after the game.”