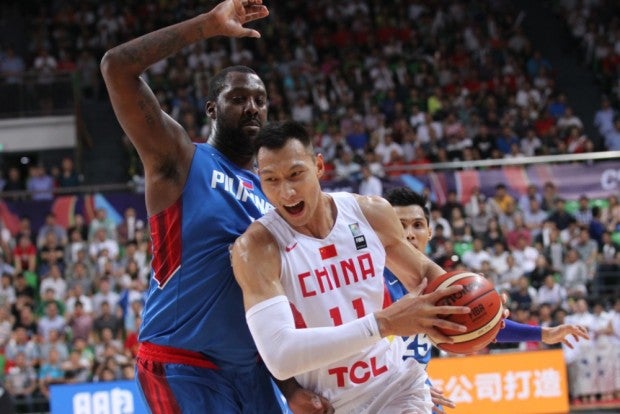 CHANGSHA CITY, China –Giving up a tremendous amount of size in literally every position, Gilas Pilipinas on Saturday night found out in a painful way that even the biggest of hearts sometimes falls short.

The Filipinos fought with all they’ve got and couldn’t stop big and relentless China, bowing, 78-67, in the gold medal match of the Fiba Asia Olympic Qualifier before a very hostile gallery that applauded their every failure at Changsha Social Work College gym here.

“This group deserves the respect of the country. They may not have won the gold medal, but they are winners as people,” Baldwin told the Inquirer.

“We just never got into an offensive flow, but we played good defense in the second half,” Baldwin added.”We just didn’t shoot well.”

No time in the game did the Filipinos enjoy an advantage in size against any Chinese five on the floor, as Gilas succumbed to sheer might and athleticism to see its seven-game winning streak come to a screeching halt and settle for the silver medal for the second straight edition.

China, which went undefeated in nine total games and was hardly pushed in the tournament, will thus be representing Asia in the 2016 Rio de Janeiro Olympics in Brazil, the bigger prize compared to the gold medal the huge Chinese crowd cheered wildly for.

The Philippines, meanwhile, will have to take a stab at an Olympic ticket in a qualifying tournament, which will happen a month before the Games but will involve countries from other continents.

But once the Chinese got their rhythm and imposed their size inside, it was basically all over but the shouting as they kept the Filipinos within arm’s length from the second quarter on.

Two straight triples by burly forward Li Gen opened up a 60-44 lead with 3:36 left in the third period, and the best that the Filipinos could do after that was come within 60-50 entering the fourth.

The Philippines, though, would not survive China’s salvo to open up the final frame.

Five straight points practically knocked the wind out of the Philippines’ sails and the Filipinos would score only after three minutes had gone. By this time, the Chinese were fully in sync, with Ding Yenyuhang connecting on another triple that made it 70-54 going into the last 5:31.

And for the first time in the tournament, Gilas coach Tab Baldwin declined to be interviewed immediately after the game, frustrated like those in the rest of the team for seeing their valiant efforts fall short.

China has now won this tournament for the second time in the last three editions, its last championship coming in 2011, also at the expense of Baldwin and his gritty Jordan crew, in Wuhan.

Andray Blatche was the only Filipino in twin digits with 17, as the Chinese defense shut down Jason Castro and Ranidel de Ocampo by holding the prolific Filipinos to a combined 15 points.

Ailun Guo was the first point guard that outplayed the 6-foot Castro in the tournament, pacing all Chinese shooters with 19 points, with Yi Jianlian, the former Milwaukee Buck in the NBA, shooting 11 points that went with 15 rebounds.

There were also several questionable calls throughout the game, but looking deeper into the outcome, the domination wouldn’t have changed drastically even if the referees called it fair.