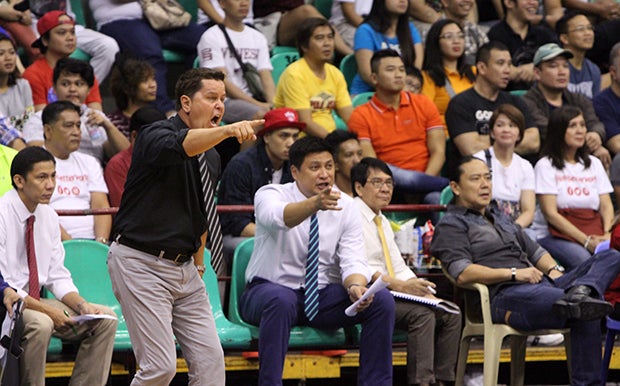 San Miguel Beer and Barangay Ginebra are at the opposite end of the standings ahead of their clash on Sunday night.

The Beermen are among the league-leaders while the Kings are near the bottom and at the end of their anticipated showdown, the disparity showed with San Miguel ripping Ginebra, 100-82.

“We’re not at their level. It was very obvious tonight. It was disappointing,” Ginebra head coach Tim Cone admitted.

“We have a history and a legend that we have to live up to and that’s the never say die attitude. We just didn’t have that tonight and that’s something we got to try to build and believe in and get the fans to believe that we believe, it too,” Cone, winners of two Grand Slams, added. “I was really disappointed with our play and disappointed for our fans that they had to watch that.”

With a loaded roster led by 7-foot center Greg Slaughter and playmaker LA Tenorio, Ginebra has the pieces and coaching staff to contend.

But with a 1-3 record through four games, the Kings have yet to find the right mix.

Cone offerred no excuses for his team’s third loss in four starts but despite a woeful start, he remains positive that Ginebra will be able to come through.

“We’re just gonna get better from here,” he said.

Ginebra takes on winless Meralco next on Tuesday.