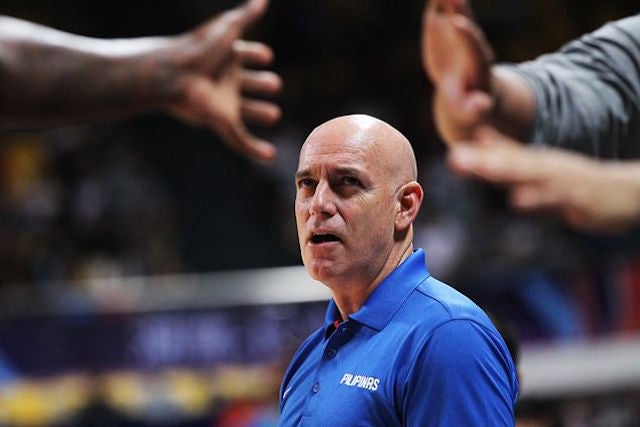 Gilas coach Tab Baldwin didn’t mince his words when voicing out his frustrations over the repeated absences in the national team’s Monday practices.

Returning to full training on Monday at Moro Lorenzo Sports Center in Ateneo, the American-Kiwi mentor only had 13 attendees from his pool for the first session of the year.

“I don’t like it,” said Baldwin. “There’s only one acceptable attendance and it’s 100-percent, and we don’t have that one yet. I don’t like it, I don’t encourage it to be that way. There are certainly reasons that guys don’t train but they should be here. We’ll see what the response is.”

The attendance of the national team practices took a hit late last year because of the PBA Playoffs, with players opting to sit out the Gilas Monday sessions.

With the team taking a two-month break before re-convening on Monday, the body count remains as Baldwin’s biggest headache.

“Very frustrated, but what has that accomplished? I got to work with the guys that are here, and we got to do the best we can, but we’re all supposed to be here and it’s been consistent absences and lack of participation in practices, and a lot of it, sometimes, are good reasons or reasons we approve, but it doesn’t help me do my job,” he said.

“I want to do my job as well as I can for Gilas, for the country, for the fans, for my boss, and I need the compliance of the players to do that. All I can do is to give them a hard message that those who get on the court and work are the guys I select. That’s the way it is,” he continued. “I would prefer if they will re-prioritize or prioritize in a different way so that those reasons didn’t exist.”

Baldwin is also trying to send a strong message to all players in the pool that if they really are willing to play for the country, they will have to show up and train with the team.

“We’ve got to start taking some risks now. This is what this is for, to prepare, and we got to prepare correctly,” he said. “The only reason to sit out these days from now on is injury. If you had a game yesterday or a game tomorrow, get here and work. I’m not going to over-burden those guys. I understand what’s at stake, but if anybody’s trying to protect themselves against injuries, it just doesn’t work that way. You got to be a ball player if you want to play for the national team.”

Knowing that the country is coming in as heavy underdogs, Baldwin is banking on the players’ familiarity with each other to score an upset against powerhouse teams like France, Canada, and Turkey for the Olympic Qualifying Tournament in July here in Manila.

But he admits the Nationals are far from ready.

“Cohesion is the biggest concern. Building a chemistry in the team and getting them focused now for something that is six months away, that is a difficult task because the nature of professional guys is, ‘We’re ready to go,’ but we’re not ready to go. We’re still a long way and we need to maximize our preparation time because it isn’t enough,” he said. “Getting that focus, seriousness, intensity, while we have divided attention with the PBA teams, it’s a difficult process.”

“We have a lot of work to do. We’re behind where we should be, but I don’t think we’re behind what other teams have been able to do.”