UAAP Volleyball’s 5 best opposite spikers after Round 1

Former UAAP stars Aiza Maizo and Michele Gumabao were some of the standout opposite spikers during their time in the collegiate ranks. They were both admired and feared for their vicious attacks and relentless defense. The players on this list—a good mix of youngsters and veterans—may just be the next Maizo or Gumabao, or who knows, even better. INQUIRER.net counts down the five best opposite spikers in the UAAP after the first round. 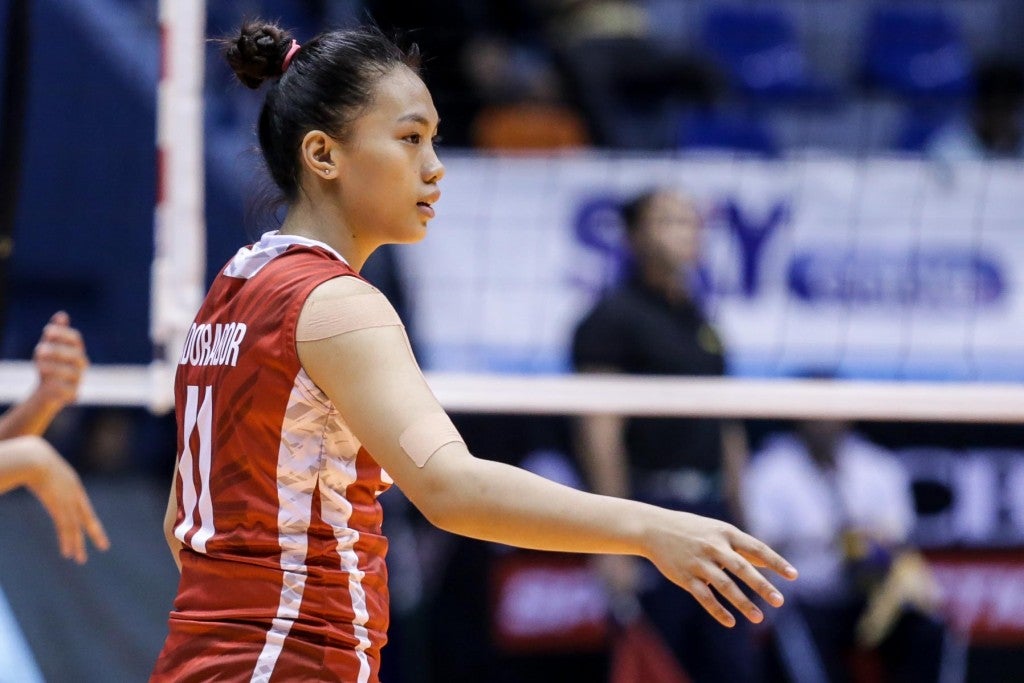 Already on her third year in the UAAP and Shaya Adorador remains as the consistent brightspot in UE’s struggling offense. With 68 points under her belt after the first round, she has better output compared to the other players on this list, but that has yet to be felt in the record of the Lady Warriors, who have yet to win a single game in four years. That may be an added psychological struggle for Adorador, but you can expect her to deliver whenever she’s on the court—whether her team ends up winning or not. Veteran Carmela Tunay struggled with consistency all throughout her collegiate career. But with laser-like focus on her final playing year in the UAAP, Tunay looks like she has finally settled in her role of being a vocal leader but a steady support to younger and more explosive teammates EJ Laure and Cherry Rondina. She collected 55 points after the halfway mark. And if she continues to play with the right amount of focus and grit, Tunay’s redemption may just be the real thing. Amy Ahomiro is back to the utility position after playing middle blocker in Ateneo’s back-to-back championship runs. This is Coach Tai Bundit’s ploy to fortify the Lady Eagles’ blocking. And while we know last year’s Finals MVP is a capable attacker and defender, other players in this position have provided better stats. She amassed 43 points in the first round—the lowest output among attackers in her squad’s first six. Her teammates Alyssa Valdez, Joanna Maraguinot, Bea De Leon and Maddie Madayag may have racked in the points in the first round, but Ahomiro can surely deliver once given the chance. While some quarters were already expecting that Isa Molde would run away with the Rookie of the Year award, her teammate Diana Carlos has made a strong case to be considered for the plum too. The Pampanga native closed the first round with strong performances in UP’s back-to-back wins against UST and NU to bring her halfway-mark haul to 80 points. She is also her team’s best blocker with 0.46 snuff per set. At 5’11” tall, Mylene Paat is the quintessential opposite spiker. She is imposing on both her offense and net defense. She and teammates Jema Galanza and May Roque form Adamson’s three-headed monster who has wreaked havoc in the UAAP in the first round. She is currently the league’s eighth-best scorer with 86 kills. She is also the tournament’s sixth-best server with a total of 13 aces. If anyone would have said at the beginning of the tournament that sophomore Toni Rose Basas would be the most dominant opposite spiker in the league, very few people would have believed it. While she has shown flashes of brilliance during her rookie year, other more established utility players deserved higher billing.

But Basas is not having any of that.

Displaying tremendous improvement, Basas has developed into not just the best opposite spiker after the first round, but one of the deadliest players in the league. She has transitioned from being a seldom-used player last year to her team’s number 1 option in offense this season so far. Everything’s coming up roses for Basas who registered third-best 116 points in the first round. She is also the league’s fifth-best spiker and server.