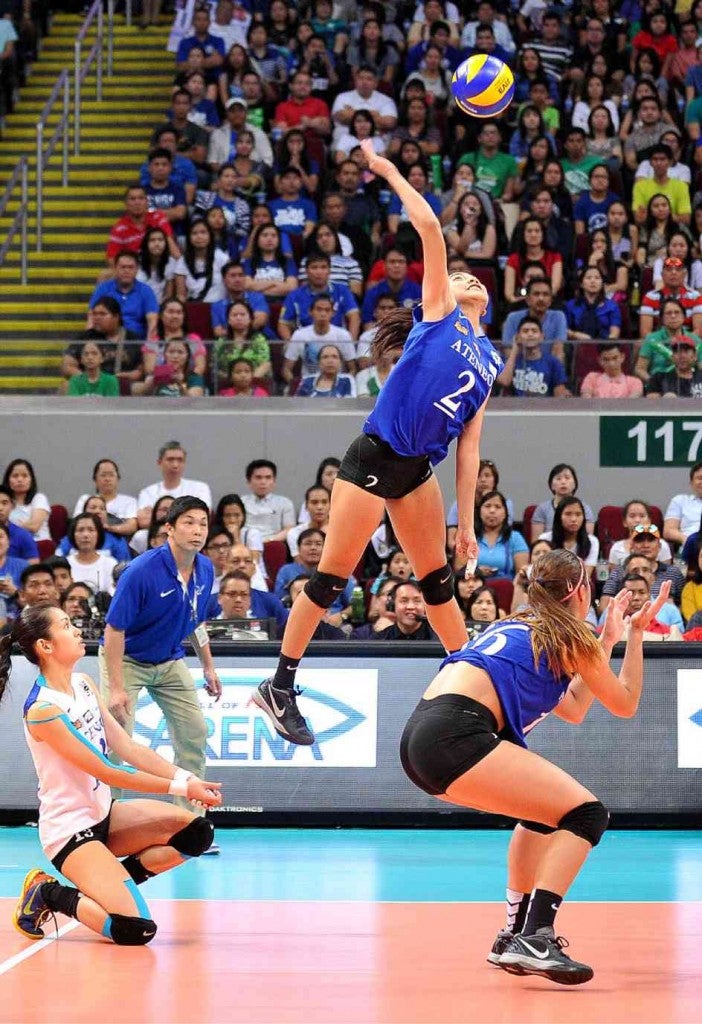 ALYSSA VALDEZ soars high for a kill. The phenomenal Ateneo superstar, who steered the Lady Eagles to a championship via a season sweep, was named Most Valuable Player of the season. AUGUST DELA CRUZ

They were perfect this time.

Unmatched in every way, the Ateneo Lady Eagles whipped the La Salle Lady Spikers, 25-22, 25-17, 25-23, to complete a historic 16-0 season sweep of the UAAP women’s volleyball tournament yesterday at Mall of Asia Arena.

The Lady Eagles reigned for the second straight season with Alyssa Valdez taking charge in Game 2 of the Finals that drew a crowd of 20,705.

But unlike last year when they emerged as unlikely queens of volleyball, the Lady Eagles could do no wrong this time.

Valdez, who bagged her second straight season MVP award, pumped in 20 points against a La Salle side that gave everything it could even without injured star Ara Galang.

But Valdez deflected the credit to Ateneo’s Thai coach Tai Bundit and the rest of the Lady Eagles, who overwhelmed the Lady Spikers with relentless attacks, 45-26.

“We did not expect anything, we just did our best today,” said Valdez. “We really got lucky. Everyone played good, even La Salle.”

Finals MVP Amy Ahomiro teamed up with Michelle Morente for six of the Lady Eagles’ 11 aces as both finished with 10 points each.

“It’s a weird feeling to be undefeated,” said Ahomiro after the Lady Eagles set the longest winning streak in a season.

The Lady Eagles emerged as the first team in over a decade to pull off a perfect season since the Lady Spikers became outright champions with a 14-0 record in 2004.

Moreover, the back-to-back feat completed Ateneo’s bid for a double crown, just a week after its men’s team bagged its first ever championship.

“[Last season] we had nothing to lose, but this year there was so much pressure not just on the coaches but on ourselves,” said a relieved Valdez.

“But we made sure to convert that pressure into motivation and to perform better everyday.”