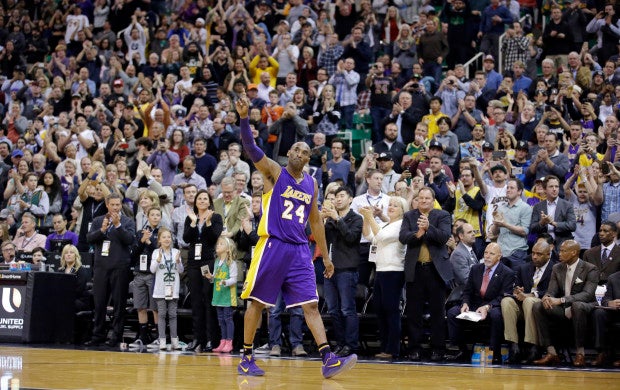 Los Angeles Lakers forward Kobe Bryant (24) waves as he walks off the court during the second half of an NBA basketball game, Monday, March 28, 2016, in Salt Lake City. The Jazz won 123-75. (AP Photo/Rick Bowmer)

SALT LAKE CITY — Rodney Hood will never forget the night Kobe Bryant requested to guard the second-year player because he was virtually unstoppable. That’s a huge compliment from the future Hall of Famer.

Hood scored 30 points and the Jazz turned Bryant’s last visit to Utah into the worst loss of his career with a 123-75 victory on Monday night that matched the Lakers’ largest defeat in franchise history.

“We were just talking a little bit of trash,” Hood said. “He was just congratulating me on the season. I just told him he was the greatest of all-time. A guy I’ve been looking up to since I was a little child. … It was just a great night tonight.

“Those are memories I’ll forever take. Going back to Hawaii (during preseason). Tonight. Every single time I get a chance to play against him, that’s something I’ll remember after I’m done playing ball.”

The Jazz had their biggest offensive night of the season and remained in the No. 7 slot in the Western Conference playoff race, one game ahead of the Houston Rockets.

Hood and the Jazz put the game away early in the first quarter with a 17-2 start. The second-year guard was 5 for 5 from the field for 14 first-quarter points. He had 30 at halftime, including a franchise record-tying eight 3-pointers, and fell two points shy of his career high for a game while Bryant face-guarded him in the second half and attempted to not let him touch the ball.

“I just tried to choke plays off,” Bryant said. “If he catches it, then I’m killed, especially tonight because I’ve played way too many games in a row. I can’t move. If he catches it, he can go right by me. So I tried not to let him catch it.”

Shelvin Mack and Trevor Booker added 17 apiece as the Jazz shot 51.7 percent from the field.

Lou Williams was the lone Laker with any offensive success and finished with 16 points. The Los Angeles starters combined to shoot 12 for 51 from the field, but at least Bryant had some success on defense.

“Kobe wanted to take on the challenge,” Lakers coach Byron Scott said. “It’s a damn shame our oldest player has to take the challenge. It says a lot about him, obviously. It’s what he has done all his life, but nobody else wanted to step up and take that challenge.

“That’s a shame that the oldest guy on our team that is leaving this league in eight games was the one that kind of had to shut him down.”