Bradley an underdog in every way vs Pacquiao 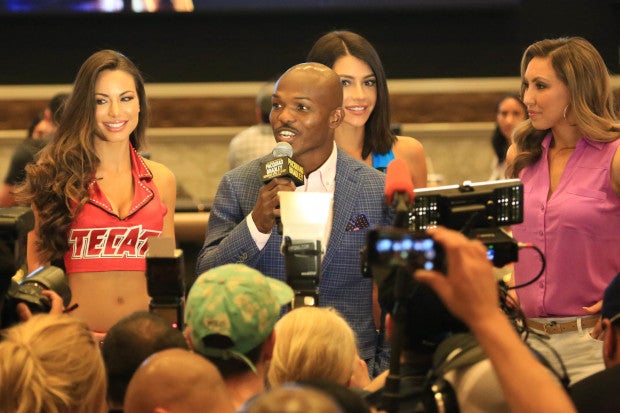 LAS VEGAS—There was one thing that the official welcome for Timothy Bradley made really clear. Intentional or not, he is the underdog in his third battle against Filipino ring icon Manny Pacquiao on Saturday at MGM Grand here.

Bradley arrived in this gambling mecca Monday needing this fight against one of the boxing’s greats to define his place in boxing; he could be that fighter who never won decisively over Pacquiao in three tries, or that one who sent him packing into retirement with a shocking loss.

Team Bradley has painted itself the underdog of the fight, with trainer Teddy Atlas profusely praising
Pacquiao in several interview.

“He’ll be better than he was for Mayweather and better than the guy Tim last saw,” Atlas told journalists.
“He’s like a 37 year-old Ferris wheel. If you get caught up in his magic, you’ll forget that he’s still just a ride you can control.”

But the underdog label isn’t really a hard sell.

Bradley was the first boxer to appear for the event and the contrast between his arrival and Pacquiao’s pretty much told the story.

While Pacquiao was nearly mobbed by the fans at the hotel lobby, Bradley easily made his way to the makeshift ring. Fans thrust boxing gloves, fight posters and other Pacquiao memorabilia to the Pacman’s direction hoping to get them signed. Only a few were successful.

Bradley, meanwhile, offered himself to the crowd in gratitude “for the support” they had shown him through the years. Fans reached out and took selfies with him as he waded through the crowd.

But in some stretches, he kept holding a pen with nothing to sign. At one point, an old couple argued until the man prevailed on his wife to have the back of her sweater signed. Another onlooker fished out a dollar bill from her wallet for Bradley to sign.

The betting odds have also installed Pacquiao as the heavy favorite of the fight. But Bradley doesn’t mind.

“Going into this fight, I just feel that I’m clear headed,” Bradley said in a recent radio interview. “I don’t have all these demons around me. No matter how you look at it, we’re going into this fight 1 and 1. I’m ready for this opportunity.”

And he feels better prepared this time.

“Everybody knows I made changes during my training camp,” he told the crowd that gathered at the MGM lobby. “Hired a new trainer. The fact that I have this great trainer, great man in my corner now to make the difference honestly, truthfully. It’s been fantastic training camp.

“Being with Teddy, all the knowledge and love he spread to my family and to myself, this is the happiest I’ve ever trained. I feel like I didn’t even train for this fight. That’s how fresh I feel. I didn’t over-train, I’m ready to go. Saturday should be great night for us.”