Cardel, not Jarencio, coaches GlobalPort in win over Phoenix 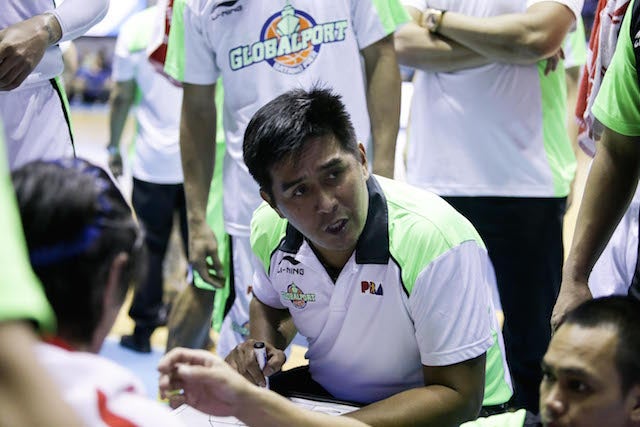 Johnedel Cardel of GlobalPort gives instructions to his players during a game against Phoenix. Tristan Tamayo/INQUIRER.net

GlobalPort spurred speculation of a coaching change when its assistant manager Johnedel Cardel called the shots in the Batang Pier’s game against Phoenix on Friday.

Cardel, though, implied nothing is permanent as the decision to temporarily put him in the lead was because head coach Pido Jarencio is suffering from gout and deputy Eric Gonzales has his hands full with the PBA D-League Finals.

“Balasa lang,” Cardel told reporters after steering GlobalPort to a 125-118 victory that ended the team’s seven-game losing skid and allowed the Batang Pier to exit the conference on a positive note with a 3-8 record.

“I talked to the players sa practice, and I’m thankful for the guys, especially Terrence and Billy. It’s my first job coaching a professional basketball team and looking back, talagang mas mahirap mag-coach,” said the former PBA guard, who played for Alaska and defunct squads Sta. Lucia, and Shell.

Read Next
Weight not an issue for Pacquiao, Bradley
EDITORS' PICK
Is it safe to talk politics again at family gatherings? ‘The Reconciliation Dinner’ shows us what that’s like
House energy committee chair Arroyo bats for cheap electricity
EDITORIAL: To a bike-friendly future
vivo’s coming to town to grant wishes with more holiday promos
The Best Tech Gifts For The 2022 Holidays
Pagasa: Warm, sunny Sunday in most parts of PH
MOST READ
LOOK: Vhong Navarro transferred to BJMP detention facility in Taguig
The Elephant Man in the Senate
Posh village as ‘shabu’ haven
LOOK: Zanjoe Marudo bonds with Ria Atayde, her family
Don't miss out on the latest news and information.