Atlas cracks: I came up short 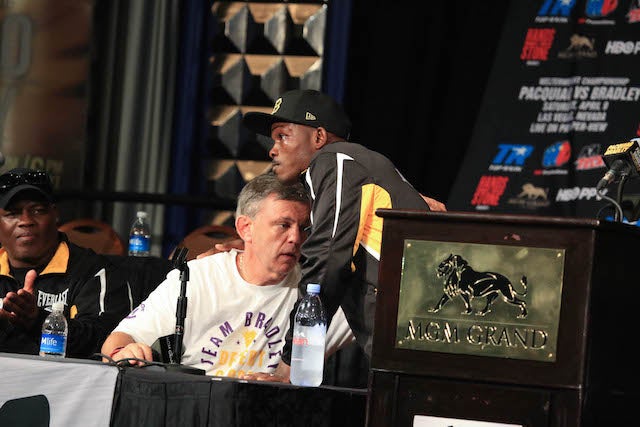 Timothy Bradley Jr. thanks his trainer Teddy Atlas during the post-fight press conference at the MGM Grand Garden Arena in Las Vegas. Bradley lost to Manny Pacquiao in their third meeting. PHOTO BY REM ZAMORA

LAS VEGAS — Teddy Atlas was in near tears as he spoke.

Always eloquent, he was at a loss for words.

After a long pause, he mumbled:

“Listen, I came up short,” Atlas, a television boxing analyst and commentator told the media in the post-fight conference. “I don’t think he (Bradley) came up short.”

Atlas was truly hurting as he’d come to regard Bradley as part of his family following a partnership forged late last year when they trained for the Brandon Rios fight.

“I think Timothy Bradley is the best human being I’ve been around with,” said Atlas.

They were successful that time and Bradley asked Atlas to be at his corner again for his third collision with Pacquiao Saturday night.

He and Bradley failed and Atlas feels that he’d let the entire Bradley family down.

Atlas had said in earlier interviews that he’d rather die than seeing Bradley lose.

Now that the inevitable has happened, Atlas was gracious in defeat.

“Gave credit to Manny, ” said Atlas. “He was terrific.”

“I told Timothy to take advantage of the way he’s moving before he exploded,” said Atlas. “Maybe I didn’t push the right buttons.”