He wasn’t born, or even raised, in Los Angeles but Bryant was the ultimate poster boy of La La Land; today, its adopted son will finally walk off the parquet floor. Derek Fisher #2 and Kobe Bryant #24 of the Los Angeles Lakers celebrate after the Lakers defeated the Boston Celtics 83-79 in Game Seven of the 2010 NBA Finals at Staples Center on June 17, 2010 in Los Angeles, California. AFP

It took Kobe Bryant two years to keep all that rage in when the Los Angeles Lakers lost to arch-rivals the Boston Celtics in the 2008 NBA Finals. A 39-point blowout in Game 6 hit Bryant like a vicious haymaker; it stung even more when he famously told his teammates after their Game 5 victory at Staples Center: “There will be a Game 7, I promise you.”

Then 2010 came and the Black Mamba was finally able to unleash his venom on the depleted Celtics.

“That 2010 series is my favorite series of all time, just because it was the most competitive one,” Bryant told the Boston Herald. “It was the most difficult one. I mean, we’re going against four future Hall of Famers. That doesn’t happen too often.”

Bryant faced up against three first-ballot future Hall of Famers in Kevin Garnett, Paul Pierce, and Ray Allen but he had European legend Pau Gasol and the iconic Phil Jackson with him in a seven-game series that is sure to land in basketball annals.

It was his fifth and final title but it was the championship that capped off his revenge tour against the Celtics. There are scorers, then there’s Kobe.

It was Jan. 22, 2006 and the Lakers were under the command of Byrant. Shaquille O’Neal was in sunny Miami with Gary Payton while Karl Malone was chilling in his Louisiana home.

Calendars don’t register Jan.22 as anything special, but Bryant made it extraordinary.

Bryant poured 81 points on the sorry Toronto Raptors while the Lakers wore their white home alternate jerseys, a far-off color from the franchise’s regal purple-and-gold.

It was the second-best scoring performance in NBA history, next only to Wilt Chamberlain’s 100, but it’s something that would resonate in history for years to come. Kobe Bryant of the Los Angeles Lakers shoots during Game 5 of the NBA Finals against the Orlando Magic on June 14, 2009 at Amway Arena in Orlando, Florida. AFP

It took only took three years for Bryant’s career to reach legendary status when he won his first title in 2000. By 2002 it had become a three-peat, with he and O’Neal riding the NBA like their personal pony.

A string of internal factors, however, brought down the mighty Laker Empire of the early 2000s and not even the arrival of Malone and Payton to Los Angeles could save them.

There was no hardware to remember 2004 for the Lakers with the MVP trophy going to Kevin Garnett of the Minnesota Timberwolves and the title going to the Detroit Pistons.

It would take five more years for Bryant to make the Lakers great again, and he did it in 2009 as the main actor.

There was no more O’Neal to take the giant spotlight; this time it was Bryant who steered the golden Laker ship, Gasol was his first mate, and the Orlando Magic were the hapless victim.

Bryant finally solidified his legacy as an alpha dog as their 2009 title would forever be remembered as his first without O’Neal. 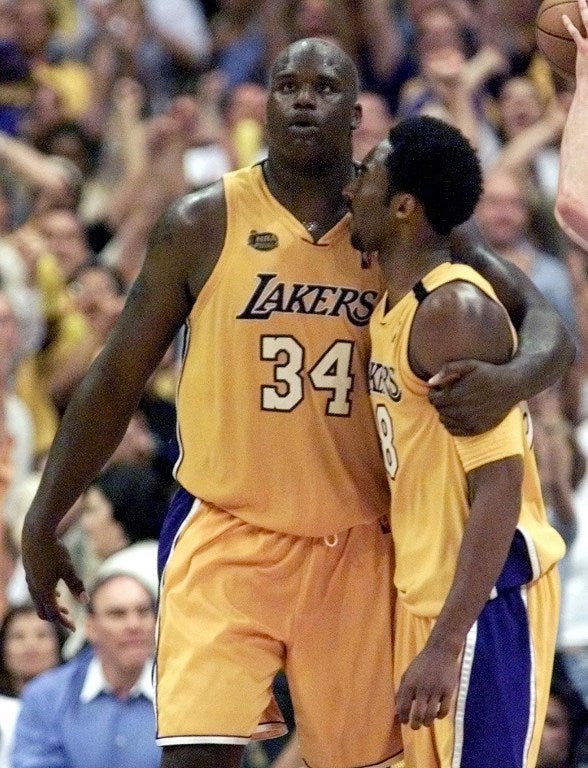 Shaquille O’Neal of the Los Angeles Lakers hugs teammate Kobe Bryant 19 June, 2000, during the second half of game 6 of the NBA Finals at Staples Center in Los Angeles, CA. AFP

Of course first love will always linger, it’s the start of everything, and Bryant’s first title in 2000 was just as epic as the other four.

It was the start of Bryant’s legendary titles and it was also the beginning of the budding Lakers Dynasty in the 2000s.

Bryant and O’Neal were the duo to beat in the decade and the two tore the NBA apart with their inside-outside dominance.

Los Angeles faced the Indiana Pacers in the Finals but it was their series against the Portland Trailblazers that produced the highlight.

Any Laker fan — wait scratch that — any NBA fan will always remember the immortal line from Game 7 of the Western Conference Finals: “Bryant… To Shaq!” NBA Commissioner David Stern presents Kobe Bryant #24 of the Los Angeles Lakers the MVP Trophy before the start of Game Two of the Western Conference Semifinals against the Utah Jazz during the 2008 NBA Playoffs on May 7, 2008 at Staples Center in Los Angeles, California. AFP

As great as Bryant was, his three championships were not enough to place him atop the greatest individual players of all time.

Sure, a three-peat to start the decade is almost impossible to duplicate and it always dragged the notion that O’Neal was the hero and Bryant was the young sidekick.

Even his greatness would not award him an MVP, with the trophy going to six people before him.

O’Neal was the first MVP of the new millennium, then Tim Duncan of the San Antonio Spurs got two, then it was Garnett’s turn, then Steve Nash of the Phoenix Suns would take the next two, then Dirk Nowitzki had his own.

Come 2008, the Lakers were struggling and Bryant even asked to be traded but Gasol came along and changed their, and the Mamba’s, fortunes.

Bryant would win the only season MVP of his illustrious career that surely complemented his first three titles. A three-peat is no ordinary task with only three teams completing the feat in NBA history.

San Antonio was the first champion after the Bulls era but it was the Lakers who duplicated what Michael Jordan, Scottie Pippen, and the rest of the men in red did.

It was also the Zen Master Jackson who guided the Lakers in the accomplishment.

Bryant was still with O’Neal in 2002 but a three-peat’s a three-peat and no amount of internal struggles could change that. In this July 12, 1996, file photo, Kobe Bryant, 17, jokes with the media as he holds his Los Angeles Lakers jersey during a news conference in Inglewood, Calif. Bryant was acquired from the Charlotte Hornets by the Lakers in exchange for veteran center Vlade Divac. AP

What would go down as one of the best draft classes in NBA history just had to have Bryant.

In that draft class, however, Bryant was a mere filler as he was the 13th overall pick behind Vitaly Potapenko, which was the 12th pick, and top overall pick Allen Iverson.

It was the Charlotte Hornets who drafted Bryant but the Mamba would never wear teal as Hall of Famer Jerry West, that time the Lakers general manager, pushed a trade for the teenager out of Lower Merion High School.

If it wasn’t for the Laker great’s gamble to get Bryant, the Legend of Kobe might never have happened.