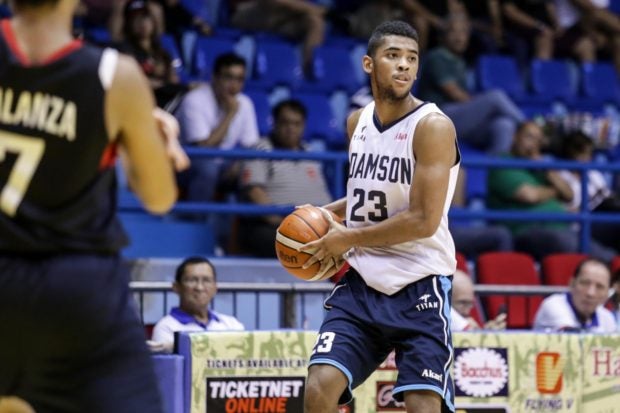 Seeing a lot of promise in Jerrick Ahanamisi, Adamson coach Franz Pumaren couldn’t help but be reminded of a former star he handled years before.

With the way Ahanmisi has been dropping long bombs, Pumaren said he could be the next sharpshooter like Renren Ritualo.

“I think he can be the second coming of Renren (Ritualo),” he said, “The kid can really shoot and he has range. What more if he starts building up his stamina and resistance. I think he can be a good player come UAAP.”

That’s why Pumaren is letting Ritualo, his former star gunner in La Salle and now assistant with the Falcons, take charge in honing the skills of the 18-year-old.

Ahanmisi’s potential was in full display when the younger brother of PBA rookie Maverick poured 26 points, on 5-of-7 shooting from three, along with five rebounds, and three assists to pace Adamson to an 83-78 win over Letran in the 2016 Filoil Flying V Preseason Premier Cup.

The soft-spoken mentor is thankful that other schools passed up on Ahanmisi.

“I guess I should thank the other schools for not giving him a second look. They are saying he is still just a potential, promising, not yet developed. But there are factors that I see in him,” said Pumaren.

In fact, the Adamson mentor has so much belief in his neophyte that he believes Jerrick could exceed Maverick, if only he could develop his body mass.

“Even at this stage offensively, scoring-wise probably, range-wise, shooting, I think Jerrick has advantage,” he said. “He just has to develop his body, because he is still young and I think he played with a lot of aggressiveness which I have been looking for. He’s no longer passive. He is slowly adjusting to college basketball and when people start recognizing him, he’s going to be a marked man.”