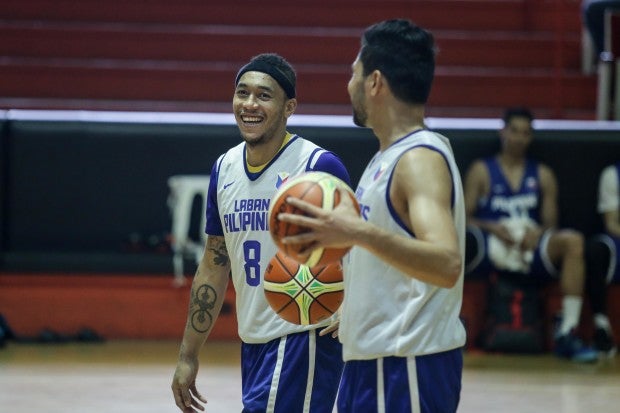 Calvin Abueva in his first training with the national team.

Calvin Abueva returned to the basketball floor Wednesday for the first time since his Alaska Aces’ bitter loss to Rain or Shine in the PBA Commissioner’s Cup Finals, and this time it’s for Gilas Pilipinas.

The dynamic forward plunged back into action after resting his right ankle that he twice sprained in the Finals series against the Elasto Painters.

While Abueva missed several national team practices due to his duties with his mother club, Gilas head coach Tab Baldwin was happy to have the energetic forward back.

“He arrived and he didn’t disappoint,” said Baldwin. “We have things to catch up on and Calvin will do that.”

Abueva was part of the Gilas team that won the silver medal in the 2015 Fiba Asia Championships in China.

Baldwin added Abueva brings the joy to the game whenever he’s on the floor and, despite the forward’s hard-nosed style, it’s the relentless passion for the sport that he wants from the feisty Beast.

“The most enduring quote about Calvin is ‘Calvin is Calvin,’ he always brings the same thing,” said Baldwin. “He brings the energy, he brings intensity, the feeling of enjoyment to the game.”

“Any team that experiences that enjoys it. They revel in that.”