Pagara stretchered out after KO loss to Juarez 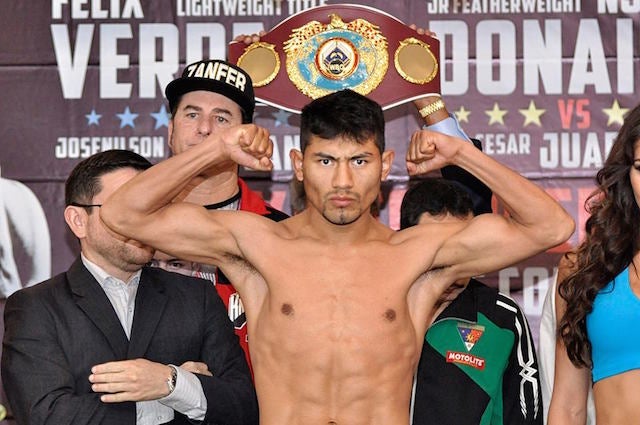 The defeat snapped the 22-year-old Pagara’s string of 26 victories and effecively set back by years his aspirations of becoming king of the 122-pound division.

Taking the best shots Pagara could offer, Juarez instead landed  a  three-punch combination that send the Filipino reeling down into  his corner  at the 15-second mark of the eighth round.

A groggy Pagara vainly tried to get up, but fell back to his knees and got counted out.

Though conscious, Pagara was later carried out of the ring on a stretcher.

As mandatory procedure, Pagara was taken to a local hospital, where he was subjected to and passed vital tests, according to Dr. Ed de la Vega of Philboxing as relayed to Dyan Castillejo.

In high spirits,  the 24-year-old Juarez, on the other hand, called out “The Filipino Flash” Nonito Donaire Jr. for a grudge title rematch.

Juarez, now 18-5 with 14 knockouts,  gave Donaire a tough fight, particularly in the second half, before dropping a unanimous decision last December.

ALA Promotions CEO and president Michael Aldeguer had promised Pagara a world title crack if he beats Juarez convincingly.

Earlier, Jason Pagara stopped Mexican Abraham Alvarez in the third round in the chief support of the fight card jointly undertaken by ALA Promotions International and ABS-CBN Sports.

Read Next
Painful lesson of 2004 can be inspiration for Portugal
EDITORS' PICK
Villar Group gears up for AllValue Shopping Party on Dec. 3; around P 1-million promos and discounts up for grabs
IATF tightens border control, suspends entry of fully vaxxed nationals from ‘green’ countries
A delightful blessing!
Metro Manila to remain under COVID Alert Level 2 until December 15
Duterte open to making jabs mandatory; Cabinet mulls ‘pressuring’ the unvaccinated
Legarda: Ending Violence Against Women, a cause for all
MOST READ
Quiboloy warns of ‘much worse than Omicron virus’ if his ‘persecution’ is not stopped
Omicron poses ‘very high’ global risk, countries must prepare–WHO
Marcoleta defends pol ads on ABS-CBN
Bongbong Marcos’ conviction in tax case not a crime involving moral turpitude — lawyer
Don't miss out on the latest news and information.