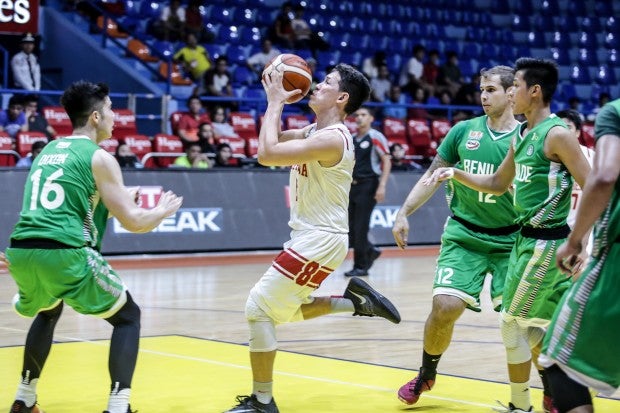 San Beda’s Robert Bolick on the way to the basket. Photo by Tristan Tamayo/INQUIRER.net

The Red Lions wasted no time breaking the game wide open, jumping to a 24-10 advantage after the first quarter and dominating the  rest of the way.

Davon Potts ignited the rout, finishing with 19 points, 12 of which coming in the first half, as San Beda coasted to its fourth win in as many games.

Donald Tankoua also tallied a double-double with 17 markers, 14 rebounds, and three blocks, while Robert Bolick and Radge Tongco both had 11 points in the victory.

It didn’t help that St. Benilde big man Christian Fajarito exited the game just before the halftime break with a sprained right foot after inadvertently stepping on teammate Clement Leutcheu.

The Senegalese big man also exited the game, falling awkwardly after a dunk attempt late in the game, that further gutted out the already thin Blazers frontcourt.

Yankie Haruna also got 17 markers in the team’s fifth straight defeat, while Carlo Young had 10 points.