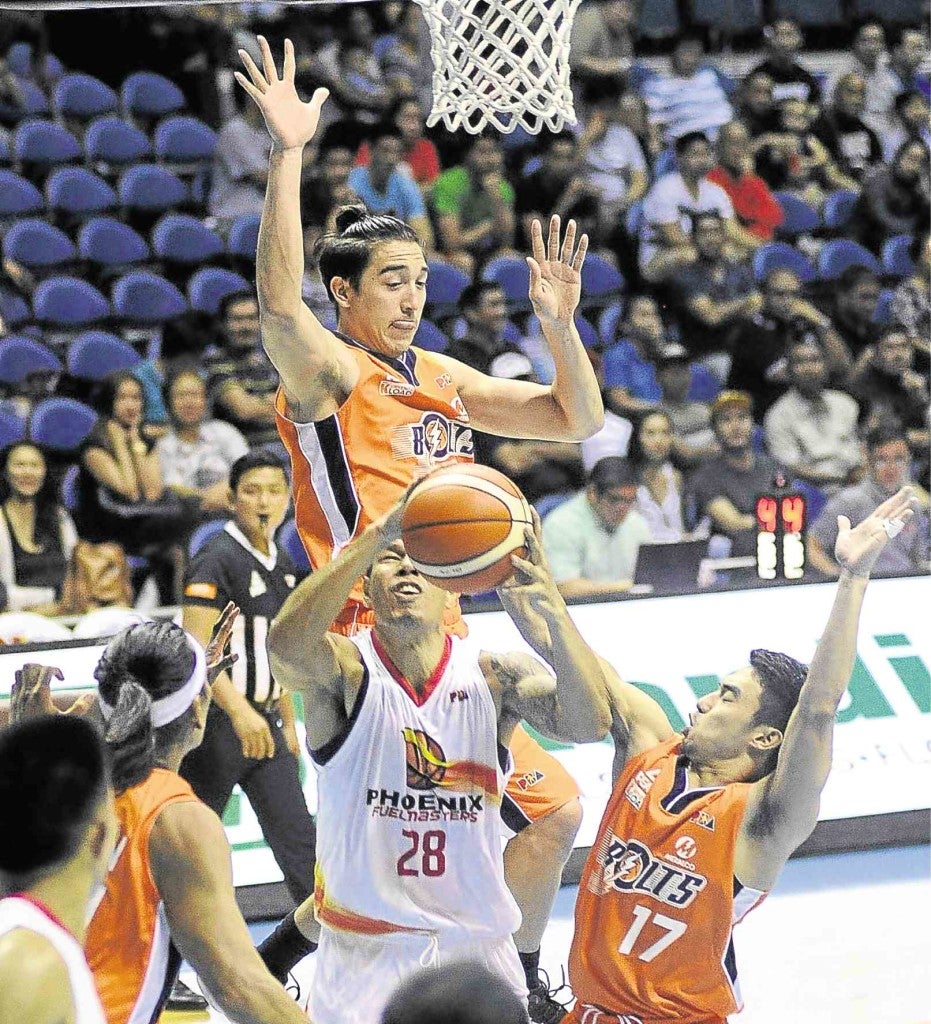 WILLIE Wilson of Phoenix tries to put up a shot under pressure from Anjo Caram (right) and Cliff Hodge of Meralco in last night’s game. AUGUST DELA CRUZ

ALLEN Durham scored 32 points, grabbed 22 rebounds and had five assists last night in a performance that had Meralco coach Norman Black looking back at the good, old times when imports did everything to make their teams win.

“I don’t want to call anybody a horse,” Black said after Durham keyed the Bolts’ 108-103 victory over Phoenix Petroleum at the start of the PBA Governors’ Cup at Smart Araneta Coliseum in Cubao.

“He’s a thoroughbred,” Black added after Durham scored six of his total in a telling 10-3 spurt that had the Bolts erasing a 95-97 deficit to prevail. “He is a throwback to the old days. He can score, rebound and is a willing passer.

“He reminds me of [PBA import greats] Billy Ray Bates, Bobby Parks, David Thirdkill. We’re blessed to have him, also because he has a great attitude.”

Mahindra got 22 points and eight rebounds from import James White and scored 13 points in overtime to post a 100-92 win over Star in the nightcap.

Aldrech Ramos had 17 and Asian import Iman Mashaddy contributed 15 for the Enforcers. Marqus Blakely fired 21 points and grabbed 15 rebounds for the Hotshots.

Meralco blew leads of as large as 15 points and even trailed by three early in the fourth before pouncing on a series of miscues by the Fuel Masters in the stretch and riding Durham offensively to survive.

Four locals scored in twin digits for the Bolts, with Jimmy Alapag and Jared Dillinger rising 15 each. Rookie Chris Newsome and Cliff Hodge combined for another 25.

Mohammad Jamshidi saw action even without the benefit of practice, finishing with nine points and three assists in 14 minutes.