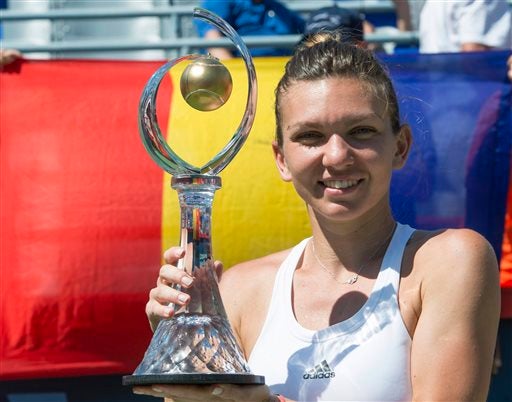 Simona Halep, of Romania, holds up her trophy in front of her national flag after defeating Madison Keys, of the United States, in the final of the Rogers Cup tennis tournament, Sunday, July 31, 2016, in Montreal. Hale won 7-6 (2), 6-3. (Paul Chiasson/The Canadian Press via AP)

MONTREAL — The many red-and-yellow-clad Romanian fans at Uniprix Stadium got what they came for Sunday when Simona Halep beat Madison Keys in the Rogers Cup final.

A roar went up and flags waved when Halep finished off the error-prone Keys 7-6 (2), 6-3 to claim the title in Canada on her second try, one year after heat stroke forced her to retire from the final in Toronto.

“I like being here in Montreal at lot,” said Halep, seeded fifth and set to jump to No. 3 in the world. “With all the Romanians, I felt like at home. Many people were coming every day. It was an amazing atmosphere down there. The man that announced us on the court said two words in Romanian, so that motivated me a lot.”

Halep has three victories this year and 14 overall. She has won nine consecutive matches, including a victory at her home tournament two weeks ago. She called the Bucharest event “a small tournament” that nonetheless showed she was playing strong tennis.

Halep later played in the doubles final, teaming with compatriot Monica Niculescu in a 6-3, 7-6 (5) loss to Russians Ekaterina Makarova and Elena Vesnina. Halep was attempting to become the first to sweep the titles at the Rogers Cup since Martina Hingis in 2000.

Halep was not the only Romanian athlete in the spotlight of late. She arrived last week in time to take part in the 40th anniversary of the 1976 Montreal Olympics. The star guest was Nadia Comaneci, the Romanian who dazzled the Games with the first perfect 10 in Olympic gymnastics history.

“When I arrived here first day, I went to that big event for her,” Halep said. “It motivated me a bit. It feels nice that 40 years later I won here in Montreal. It’s a nice thing for Romanians. I’m happy that I could do it.”

Halep outlasted the 10th-seeded Keys in a messy first set and dominated the second in a 1-hour, 16-minute hardcourt match in warm, sunny weather.

Keys has the more powerful serve, but the 21-year-old struggled to get in her first attempts. That played to Halep’s strength as a strong rallier and baseline player. Keys repeatedly ended rallies with shots into the net as Halep patiently kept the ball in play.

“I don’t think I was serving as well,” Keys said. “I think it was just a matter of close points here or there.

“That was really the whole match. I was starting to press a little bit. There were some times when I maybe could have taken a step back and hit a safer ball. I was just going for some shots too early.”

Keys will climb to ninth in the world, matching her career best. She beat Venus Williams in the third round.

“I think I played really a pretty good tournament,” said Keys, set to play in the Rio Olympics.

Halep opted not to go to Rio de Janeiro, so she plans to relax and celebrate for a few days and then prepare for her next WTA event in Cincinnati.

Halep advances to 2nd round at the Australian Open