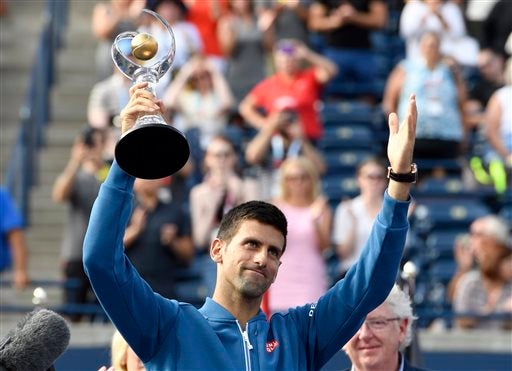 Novak Djokovic, of Serbia, salutes the spectators while holding the trophy after his win over Kei Nishikori, of Japan, in the final of the Rogers Cup tennis tournament, Sunday, July 31, 2016, in Toronto. Djokovic won 6-3, 7-5.(Frank Gunn/The Canadian Press via AP)

TORONTO — Novak Djokovic paused after accepting the Rogers Cup trophy for the fourth time, scanned the stands Sunday at York University’s Aviva Centre and asked everyone in the crowd to hug the person beside them.

A small chuckle circulated the capacity crowd and then Djokovic said he would lead by example, turning to public announcer Ken Crosina and wrapping his arms around the emcee. Fans laughed and followed suit.

“It was a really wonderful moment,” Djokovic said. “I did feel that it was just the right moment for me to ask politely the crowd to do that, because in the end of the day, we are all here for the same thing. We are all here to connect through tennis, through passion for the sport.

“It’s nice that we got to sense and feel that kind of energy around the stadium.”

The top-ranked Serb beat third-seeded Kei Nishikori of Japan 6-3, 7-5 after a short rain delay. Djokovic also won the hardcourt event that rotates between Toronto and Montreal 2007, 2011 and 2012. Ivan Lendl holds the tournament record with six titles.

The 29-year-old Djokovic has seven victories this year and 66 overall, a record 30 in ATP World Tour Masters 1000 events such as the Canadian stop. He has 12 Grand Slam titles, winning this year in Australia and France.

“After Grand Slams, these are the biggest events we have in sport of tennis,” Djokovic said. “Naturally, I’m going to be very disciplined, committed, and focused to do well.”

Djokovic has won his last nine matches against Nishikori and leads the series 10-2.

“I had too many unforced errors especially during important points,” Nishikori said. “He was returning really well today, I think. I was hitting some good first serves, but he was making returns in deep.”

Djokovic on verge of $100 million breakthrough