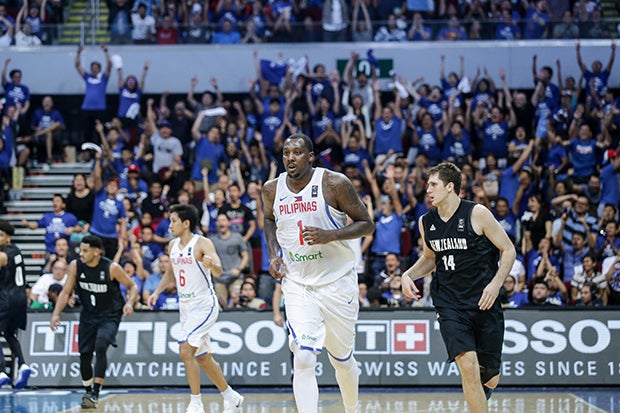 Gilas Pilipinas vs New Zealand in a FIBA OQT match at Mall of Asia Arena. Photo by Tristan Tamayo/INQUIRER.net

“I think it should be a pool,” he said on Monday after the SBP’s National Congress and Elections at Dusit Thani Hotel in Makati. “Naturalization is one of the three ways that you can naturalize a person into a Philippine citizenship and it is only in Congress where we have the option to naturalize on the basis of the Philippines’ need.”

Puno, who authored the bills to naturalize Marcus Douthit and Andray Blatche before, is seeking to at least get two to four naturalized players at the mamixum, all of whom he hopes to bolster the national team program.

That’s why Puno, who is also the chairman for the National Unity Party, is eyeing to have a dialogue with Fiba regarding these issues.

“Hopefully we’ll be able to get one or more naturalized players,” he said.

Puno also stated the possibility of the women’s national team also enlisting a naturalized player to help its campaign in the international tournaments.

Aside from naturalized players, one of the matters Puno wants to take action on is for Fiba to ease up on the rule that states overseas-based players must secure their nation’s passports at the age of 16.

“You have to be able to be in discussions with Fiba about relaxing the eligibility rules,” he said. “I think the name of the game is really adapting to change because right now, Fiba is changing. While the elements of putting together a strong national team remain, those elements are the same, but the importance of each become different as things change.”