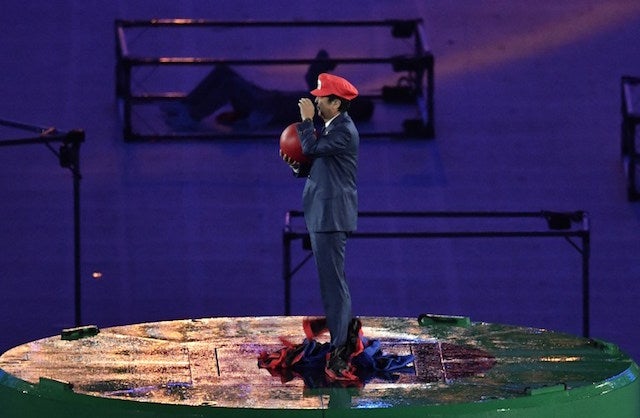 From Rio to Tokyo.

Japanese Prime Minister Shinzo Abe made a prompt appearance at the closing ceremony of the 2016 Rio Olympics, and to the crowd’s delight, he was dressed as Super Mario.

Noting he would be “late” for his presentation in Rio, Abe thought of a wild idea to welcome the Tokyo 2020 Olympics.

As seen in the animated trailer, Abe transforms into Japan’s beloved Nintendo comic character as he rushes around Tokyo’s busy streets and then jumps into a green warp pipe.

Japan's Prime Mister arriving to the Rio Olympics as Super Mario! I like the looks of the next Olympics. #tokyo2020 pic.twitter.com/12thVUZzLR

The animated clip shows Mario sliding through the pipe until he lands at the Maracana stadium. The Super Mario suit is removed and Abe stands with a bright red ball in his hands, which symbolizes the Japanese flag.

The mayor of Rio de Janeiro handed the flag to the head of the International Olympic Committee, Thomas Bach, who finally passed it on to Yuriko Koike, the current and first female governor of Tokyo.

The Tokyo 2020 trailer features Japan’s “cream of the crop” in sports and other cartoon characters such as Doraemon, Pac-Man, and Hello Kitty. Gianna Francesca Catolico