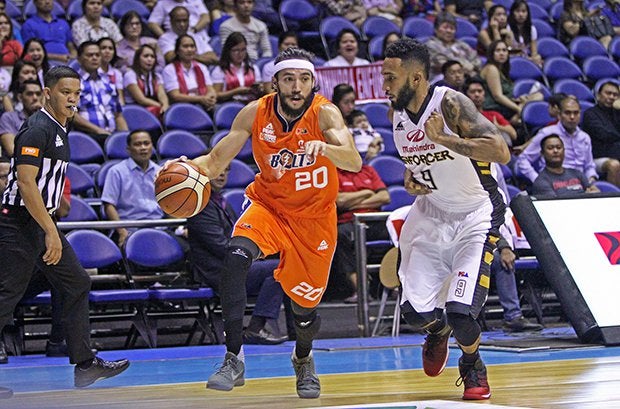 Meralco held on to beat Mahindra, 104-99, and claim the last twice-to-beat edge in the 2016 PBA Governors’ Cup Wednesday at Smart Araneta Coliseum.

Jared Dillinger made big shots down the stretch en route to a 22-point night while Allen Durham scored a game-high 34 points for the Bolts, who will face the Enforcer again on Saturday in the quarterfinals.

“I thought it was a story of two halves. In the first half, we just really couldn’t get our game going. Defensively, we’re a step slow. We just came out flat and we really didn’t have the energy to start the basketball game,” said Meralco head coach Norman Black.

“Fortunately for us at halftime, I’m not sure what I said to the players but they came out and played with so much energy in the third quarter and we had that one stretch where we were able to erase that lead deficit and take the lead from Mahindra that probably made the big difference in the game,” Black added.

Black was referring to the Bolts blistering 16-0 run in the third quarter capped by an inside basket by Dillinger that put his team ahead, 60-59, after trailing by 15.

Rookies Baser Amer and Chris Newsome also had big games with 16 and 12 points, respectively. A three-point play by Newsome gave Meralco a 93-87 lead before Dillinger nailed his fourth and final 3-pointer that widened the gap to seven, 101-94, with exactly a minute remaining.

But the Enforcer kept coming back.

KG Canaleta made three free throws to pull Mahindra within two, 101-99, with 17.9 ticks to go before Meralco sealed the game at the free throw line, making three out of its four attempts in the final 16.2 seconds.

James White led Mahindra with 22 points and 13 rebounds while Aldrech Ramos added 20. Canaleta had 10 in his first game back after undergoing appendectomy, but not even his return could stop the Enforcer’s losing skid as it extends to four games.