Lakers begin life after Kobe Bryant with youth and optimism 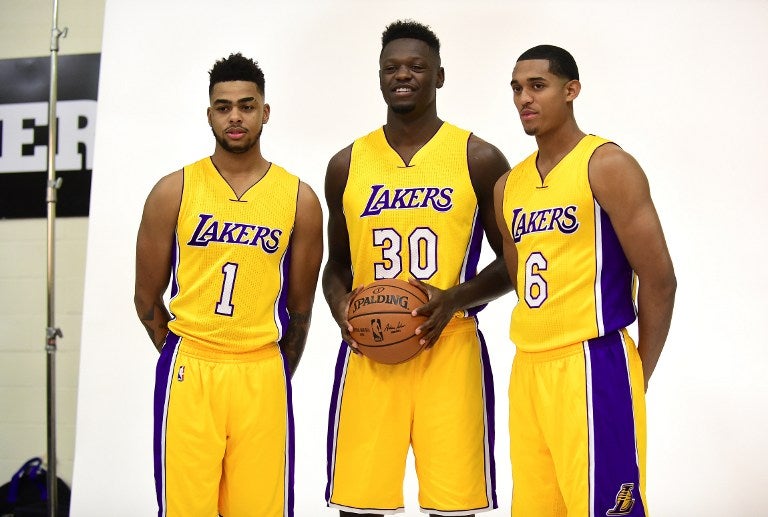 “It’s kind of boring in here,” the veteran guard said.

For all the hubbub and optimism around the Lakers as they returned for a new season, the LA native realized something was missing.

For the first time since 1995, the Lakers are heading into training camp without Kobe Bryant.

The third-leading scorer in NBA history is ensconced in retirement in Orange County, his 60-point farewell game fading into legend with each passing week. Bryant left behind a franchise that must return from a team-worst 17-65 season with a new coach, several new players and a young core seeking an identity.

“It was all about Kobe,” point guard D’Angelo Russell said of his rookie season. “Now it’s a different headline. It’s about the young guys.”

The former Golden State assistant and Lakers forward doesn’t share Bryant’s binary belief that every season is either a championship campaign or an utter failure.

“Patience will definitely be important,” said the 36-year-old Walton, who is four months younger than Lakers forward Metta World Peace. “As we set our foundation, it’s important that we don’t let whether or not we’re winning games take us from that path. We need to stay the course and see the big picture.”

Bryant’s final season was a traveling carnival devoted to showcasing the largely beloved star, with teammates reflexively deferring to him as the losses mounted. Nobody will defer to anybody else in the game plan envisioned by Walton, whose flowing offensive plan is welcomed by the Lakers’ top draft picks over the previous three years: Julius Randle, Russell and Brandon Ingram.

“Last year, we played a little bit too much for ourselves, thinking about our stats or whatever it may be,” Randle said. “That just doesn’t work. We’re playing for each other now. The energy, the vibe is different. You win 17 games, and everything is a press, a struggle. It’s not fun. But it’s starting to become fun again.”

Some changes are bigger than others: After years of quiet in the Lakers’ practice gym, this team practices with musical accompaniment. Walton liked it when he played, and the Warriors do it.

The Lakers have been working out together constantly for more than two weeks, but they still have plenty of team-building work to do this week at training camp in Santa Barbara.

Los Angeles paid exorbitantly to sign free agents Luol Deng and Timofey Mozgov, and they added a grab-bag of veteran talent including Spanish point guard Jose Calderon, Chinese big man Yi Jianlian and forward Thomas Robinson. The Lakers also have 10 returning players from last season’s 17-win team, although Young is widely expected to be jettisoned at some point in the preseason.

No newcomer is more important than Ingram, the rangy teenage forward and No. 2 pick from Duke. Russell is determined to take control of the Lakers’ offense after averaging 13.2 points and 3.3 assists as a rookie, while Randle said his recent workouts with Bryant have given his career the proper direction.

“I think it’s going to be fun,” said guard Jordan Clarkson, who got a four-year, $50 million contract extension in July. “We’ve got a young, talented group of guys coming together. These are exciting times for us. We’ve got a lot of work to do, but we’ve got a lot of room to grow.”