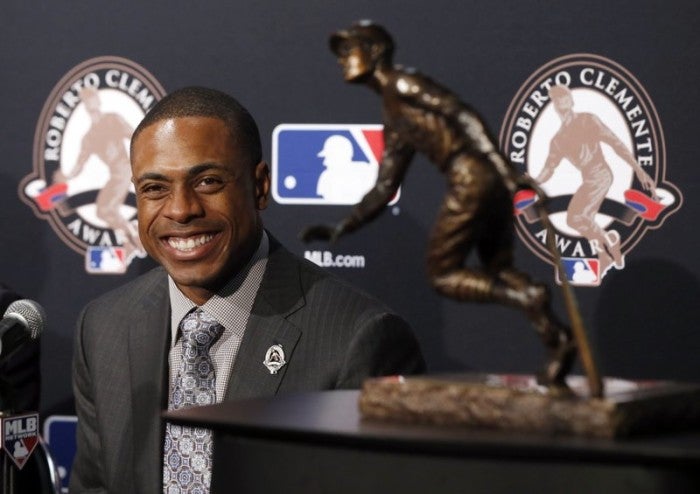 CHICAGO — Winning the Roberto Clemente Award meant a lot to Curtis Granderson. Accepting the honor in front of his parents in his hometown made the moment even sweeter for the New York Mets outfielder.

Granderson received baseball’s biggest honor for sportsmanship and community involvement before Game 3 of the World Series on Friday night at Wrigley Field. Granderson is from the Chicago suburb of Blue Island and played college ball at the University of Illinois-Chicago.

“It’s really cool to get a chance to be here with my mom and dad, who made me who I am today,” he said. “Chicago’s always been home. Though I’ve played for teams outside of Chicago, but this is what helped me to get me where I am today.”

The 35-year-old Granderson helps run baseball clinics and character development programs through the Grand Kids Foundation, which he created in 2007. He made a $5 million donation to UIC for the construction of indoor/outdoor baseball facility that opened in 2014.

The three-time All-Star also helps raise money for several charities in New York and has been active with the Mets’ military appreciation work.

“He really is a deserving recipient of this great award,” Commissioner Rob Manfred said.

Clemente, a longtime Hall of Famer for the Pirates, died on New Year’s Eve in 1972 while on a charter plane that crashed after takeoff. The plan was carrying relief aid to Nicaragua following an earthquake.

“What Roberto Clemente stood for, his family is living proof of what it was to not only be a professional athlete, but professional human being,” Granderson said. “The importance of knowing that his community is what made him who he was, and the reason why he was able to be where he was, and he never forgot that, whether his community was in Pittsburgh, where he played, or his hometown where he was able to go back to in the offseason, or during the season to help out at any time no matter what was going on.”